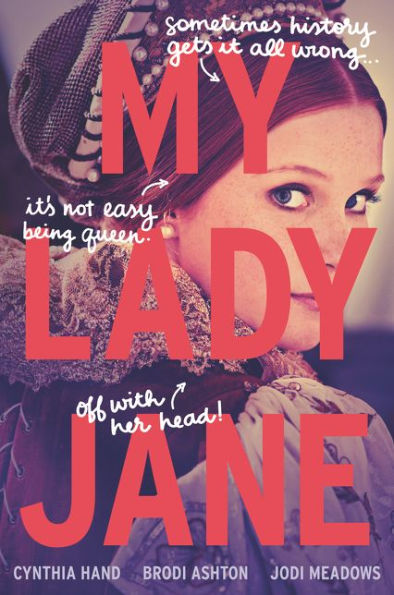 “Dearest Jane, sorry I made you marry a horse. Your father-in-law is trying to kill me. Send help,” Edward. —My Lady Jane

According to the history books, Lady Jane Grey became the Queen of England for nine days before quite literally losing her head. But according to authors Cynthia Hand, Brodi Ashton, and Jodi Meadows, there is definitely more to the story.

Edward hasn’t done very much in his lifetime. Sure, he’s been the King of England since he was a child, but he’s never even kissed a girl—and now he’s caught a deadly illness known as “the affliction,” which means he’ll be dead within a year. Unable to trust either of his sisters to take the throne, Edward decides to rewrite the line of succession, leaving the throne to the future male heir of his cousin, Lady Jane Grey.

Sixteen-year-old Jane would love nothing more than to escape from her life. Her nagging mother and a never-ending string of unfortunate engagements are positively boring compared to the adventures she reads about in her favorite books. She might want her life to be more exciting, but getting married to a complete and total stranger was not what she had in mind.

The stranger in question, Gifford Dudley (please call him G), isn’t too thrilled to be getting married either. Every morning G transforms into a horse and stays that way until sunset. He’s gotten used to the fact that he’s cursed, but he’s not totally sure how to explain that to his pretty new wife.

My Lady Jane is a fascinating alternate history adventure; it is set in a world where people called Eðians have the ability to transform themselves into animals. Despite being based on 16th-century British nobility, Edward, Jane, and Gifford all read as super-relatable to a modern teenager. Stubborn, bookish Jane and sweet, clueless Gifford certainly don’t know how to make a relationship work, let alone run a kingdom. Edward might have been the King of England, but that can’t protect him from being totally awkward around the girl that he likes.

Serious history buffs might not appreciate the extreme liberties that the authors take with the timeline, but the story will definitely appeal to open-minded historical fantasy fans and anyone looking for a good laugh. The story takes readers on a rollicking adventure across England, complete with attempted regicide, a giant bear, and lots of romance. Jane and Gifford’s slow, often awkward progression from unfriendly strangers to loving partners is equal parts endearing and frustrating. Readers will surely be rooting for the protagonists as they learn that sometimes your heart’s desire can be found in the most unexpected places.

“Dearest Jane, sorry I made you marry a horse. Your father-in-law is trying to kill me. Send help,” Edward. —My Lady Jane