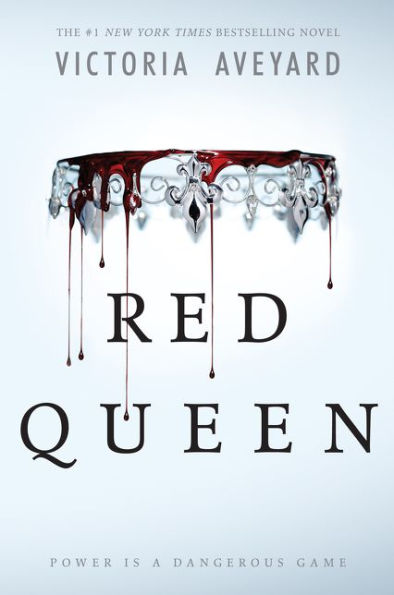 “You make us work, you make us bleed, you make us die for your wars and factories and the little comforts you don’t even notice, all because we are different,” Mare. —Red Queen

In the Kingdom of Norta, the silver blood nobility rule over the red blood commoners. While the Silver enjoy luxury, life without strife, and supernatural powers, the Reds live in poor villages, forced into a war they don’t want, and powerless against their Silver rulers. Mare Barrow is a young, Red girl simply trying to get by. After her brothers are shipped off to war, Mare steals money and food to survive, helping her parents and younger sister when she can. When she meets the mysterious Cal, her whole world is flipped upside down. He helps assign Mare to the royal Silver court, where she discovers Cal is the crown prince.

After an accident where Mare falls onto a dome of magical lightning, she discovers she has a power just like the Silvers (a supposed impossibility). To cover up her newfound power, the King forces Mare into the role of a lost Silver princess, betrothing her to his youngest son, Maven.

As Mare is drawn further into the Silver world, she begins to fall in love with Maven’s older brother, Cal. A budding love won’t stop Mare from supporting her family and fellow Reds.  In order to fight the Silvers from inside the palace, Mare secretly joins the Red freedom group. With every step she takes, danger closes in around her. If she steps the wrong way, Mare and everyone she loves will certainly die.

Red Queen focuses on the struggle surrounding the Silver and Red caste systems. For anyone born with Silver blood, life is incredibly easy and much of that luxury is created through the hard work of the lower caste of the Reds. Reds are basically soldiers for the Silvers, as the Silvers send Reds to fight in a war with a neighboring nation, the Lakelands. This gap in the social hierarchy and the ways in which the Silvers flaunt their status create a suspenseful, dangerous situation for any Red, like Mare, that interacts with a Silver because the Silvers can punish the Reds for any reason.

The story unfolds from Mare’s point of view, which allows the reader to see Mare’s inner thoughts, anxieties, and frustrations. However, Mare isn’t the most likable main character. Mare is the typical YA heroine, who is poor, but not particularly perceptive. Despite being described as knowing how to read people, she falls into numerous traps. Even though Mare is clearly on the side of the Reds, she manages to depict both sides in equal light, showing how both the Silvers and Reds can be kind or cruel.

The novel’s main theme is betrayal, which allows Mare to learn not to trust others. This theme of betrayal makes the plot predictable and a bit slow-paced. However, both the politics of the Norta Silver court and the action scenes, which include some spectacular fights, help make up for the slow pace. The Silvers aren’t entirely unified, which leads to some interesting scenes that pit the Silver caste against its own. Mare’s growing love for Cal, the crown prince, also helps to balance out the story. Red Queen leaves readers with a cliffhanger that will leave them dying to know what happens in the next book, Glass Sword.

“You make us work, you make us bleed, you make us die for your wars and factories and the little comforts you don’t even notice, all because we are different,” Mare. —Red Queen