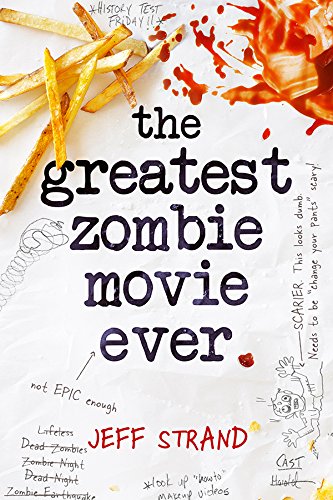 “I just point my camera and wait for the train wreck,” Spork. —The Greatest Zombie Movie Ever

Fifteen-year-old Justin and his friends Bobby and Gabe are amateur filmmakers . . . very amateur filmmakers. Their previous horror movies have gone unnoticed on YouTube (aside from a few derisive online comments) and no one seems particularly interested in their filmmaking endeavors. But after a minor setback during the trio’s recent vampire movie, Justin decides it’s time to pursue something new. Something ambitious. Something like making the Greatest Zombie Movie Ever.

Although Bobby and Gabe are immediately along for the ride, Justin’s plan to write, produce, and shoot the best feature length zombie movie of all time quickly hits a few roadblocks. For one thing, the trio has only a month to finish the project before Gabe leaves for the summer. Plus, they have no budget—just a highly dubious script that they cobbled together over two sleepless nights. But the boys’ luck turns around when they are able to get Alicia Howtz—the most popular girl in school and Justin’s longtime crush—to play the movie’s lead zombie-hunter Veronica Chaos, as well as secure a $5000 investment from Justin’s surprisingly cutthroat (and possibly mafia-affiliated) grandmother.

Despite a number of problems on set, the crew pushes forward with making the movie. With the help of a colorful cast of characters—including Bobby, Gabe, Alicia, Bobby’s Uncle Clyde, some extras in zombie makeup, and a twelve-year-old documentarian named Spork—Justin gives the film everything he has. It’s a noble effort, but in the end, Justin doesn’t complete this task the way he originally intended. When he is caught trespassing on school property, his principal threatens to suspend him unless he can get A’s on all his final exams. This puts his film on hold as Justin desperately scrambles to avoid repeating a grade. Five months later, when he does eventually complete the movie, it’s seventeen minutes long and mostly voiceover.

The Greatest Zombie Movie Ever is told from Justin’s perspective and, as a result, it’s a film nerd novel through and through. The text is punctuated by references to famous zombie movies and tropes, that Justin takes inspiration from. George A. Romero, director of Night of the Living Dead, comes to Justin in a vision to assure him that his scheme to film the final half hour of his movie in one shot will work. Additionally, Justin and his friends argue about whether they should include “fast zombies” or “slow zombies” in the movie; then they list good and bad zombie movies that have included each type. While non-zombie-appreciators might not understand these references, their placement does not detract from the story.

The Greatest Zombie Movie Ever deals primarily with the themes of sticking to your goals and persevering in the face of adversity, but this novel also explores when it’s time to call it quits. Throughout the book, Justin emphasizes the importance of finishing his zombie movie, but he also makes it clear that he has other priorities. After a problem with production, Justin worries that the only way to complete the movie is if “everybody was willing to skip school for two weeks. . .They weren’t . . .Nor was he.” Justin ends up sidelining the movie when he’s forced to choose between it and his education. However, he does eventually finish his film, even if the final product is much different from what he originally planned.

While the plot of The Greatest Zombie Movie Ever is not especially heavy on depth, this teen horror-comedy is a wildly entertaining exploration of zombie filmmaking, with a unique cast of characters and a heavy helping of relatively harmless comical mayhem. It’s the perfect book for teens who want a light read, especially if they are interested in zombie movies.

“I just point my camera and wait for the train wreck,” Spork. —The Greatest Zombie Movie Ever