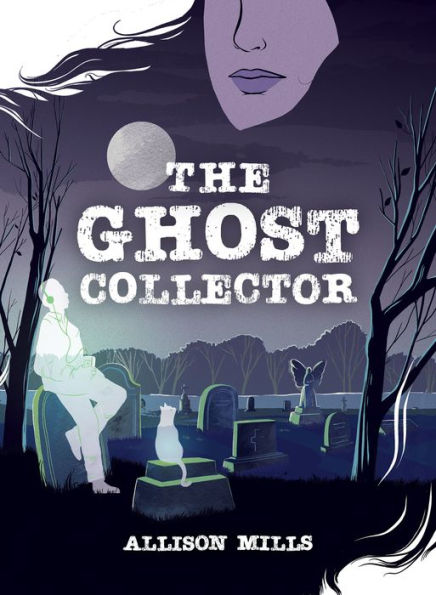 “The dead don’t care how new your shoes are or what kind of job your parents have,” Shelly. –The Ghost Collector

Ghosts don’t scare Shelly. As an apprentice to her ghost-hunting grandma, Shelly catches ghost cats, dogs, and raccoons in her hair. She helps them move on to wherever comes after death. Shelly watches her grandma do the same with people. It’s what the Cree women in their family have always done.

When Shelly’s mom is in a terrible accident and dies, Shelly’s world is completely shattered. Now, Shelly wants to know what happens after death. Where do all of the ghosts go? Why do some spirits stay as ghosts? Shelly is in a desperate search to find her mother’s ghost. She wants to talk to her mother one last time. If Shelly’s mom loved her, wouldn’t she come back as a ghost?

Without her mom, everything has changed. Now, Grandma doesn’t take Shelly to hunt ghosts. Shelly feels lost and alone. She knows she’s breaking the biggest rule of ghost-hunting: it’s not right to force spirits to stick around. Shelly never intended to keep ghosts hidden in her bedroom, but when she’s surrounded by ghosts she doesn’t feel as lonely. If she keeps hunting ghosts, maybe she will eventually find her mother’s ghost.

The Ghost Collector uses a unique premise to show one girl’s struggle with grief. In a desperate attempt to understand her mother’s death, Shelly questions several ghosts about the afterlife. At first, Shelly is angry and confused because her mother doesn’t reappear as a ghost. However, by the end of the story, Shelly accepts her mother’s death and is able to put away the belief that if her mother loved her, she would have come back as a ghost. The Crees’ beliefs are intertwined with the story, which gives Shelly an added depth.

As Shelly’s grandmother teaches her about ghosts, she also teaches her a set of rules. For example, Grandma teaches Shelly that “we’re not supposed to charge everyone for their ghost.” However, after Shelly’s mother dies, everything begins to change and Grandma begins breaking her own rules. Grandma says, “Sometimes the rules are what you make them. Sometimes they need to be bent—broken. Sometimes the world is made of hard choices.” Shelly is angry and confused that Grandma doesn’t follow her own rules, and soon Shelly thinks she also doesn’t need to follow the rules.

Shelly encounters a variety of ghosts who have various reasons for not passing on, including confusion, fear, and unfinished business. One of the ghosts encourages Shelly to spend more time with the living. The ghost tells Shelly, “I’ve got nothing but time. You, on the other hand, still need to get through the business of living. Enjoy it. Being dead isn’t all it’s cracked up to be.” Some readers, especially ones who are experiencing grief, may be disturbed by the way ghosts are portrayed (see below for specifics). The Ghost Collector allows the reader to see Shelly’s mixed emotions and understand her grief. At times Shelly’s grief is heart-wrenching, but her personal growth is also inspiring. The Ghost Collector is an engaging story that will allow readers to explore the topic of death. Parents may want to use the story to begin a discussion of the difficult topic of death.

“The dead don’t care how new your shoes are or what kind of job your parents have,” Shelly. –The Ghost Collector