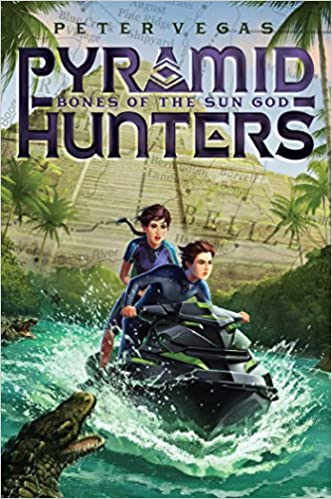 Other books by Peter Vegas

“There was no point in thinking about what could have been, or what might be. There is only now,” Sam –Bones of the Sun God

After his adventures in Egypt, Sam Force is finding it nearly impossible to return to everyday life at boarding school—especially now that he knows his parents are still alive. However, his Uncle Jasper has banned him from setting off in search of them until he can go with Sam, but Sam’s not sure he can wait that long. When a man turns up at his school—a man he last saw in the Egyptian desert—he knows he can wait no longer.

Sam needs to continue the hunt for his parents. Luckily, his friend Mary Verulam has a plan, and before he knows it, he’s on his way to Belize. However, from the moment he lands, Sam finds himself being followed and threatened. When his research leads him to a local crocodile park and the leader of a mysterious crocodile cult, things become really dangerous. Sam is left to wonder if he’ll ever be able to locate his parents—and if there is anyone he can trust.

Right from the start, Sam knows he’s going to sneak out of the country to continue the dangerous search for his parents—he just didn’t expect the search for clues to turn deadly. Multiple people warn Sam about the dangers that lay ahead and strongly encourage him to return home. However, the stubborn boy refuses to listen. While Sam’s determination and resourcefulness are admirable, he’s also impulsive and reckless. To make matters worse, Sam isn’t afraid to sneak into places he shouldn’t be, which causes many problems. Despite his dangerous actions, Sam is a likable protagonist that readers will root for.

Similar to the first book in the series—The Iron Tomb—Bones of the Sun God doesn’t shy away from violence. In book two, a new villain appears—Felix, the crocodile cult leader – who will do anything to keep his secrets safe. This includes plotting Sam’s death, killing his henchmen, and feeding people to his trained crocodiles. The constant threat of being eaten by crocodiles keeps the action high. Plus, readers will be shocked when the crocodile park’s secrets are revealed.

Bones of the Sun God continues the mystery of the pyramids and of how the Arc of the Covenant is related to them. However, Sam spends much of his time being chased by others and the story lacks the clues that made book one so much fun. Despite this, Bones of the Sun God will entertain readers. Readers will also enjoy the black and white pictures that are scattered throughout the book. The illustrations will help readers imagine some of the complicated plot points.

Readers who aren’t put off by violence will find Bones of the Sun God highly entertaining because the action-packed story follows a likable protagonist who is willing to jump into danger to discover where his missing parents are. However, the strange crocodile cult and the bloody violence may make the book inappropriate for some readers. For a high-interest, fast-paced adventure with less violence, there are many good options including The Serpent’s Secret by Sayantani Dasgupta and Tristan Strong Punches a Hole in the Sky by Kwame Mbalia. And if you want to discover some Egyptian history in a non-fiction format, check out The Curse of King Tut’s Mummy by Kathleen Weidner Zoehfeld.

Other books by Peter Vegas

“There was no point in thinking about what could have been, or what might be. There is only now,” Sam –Bones of the Sun God