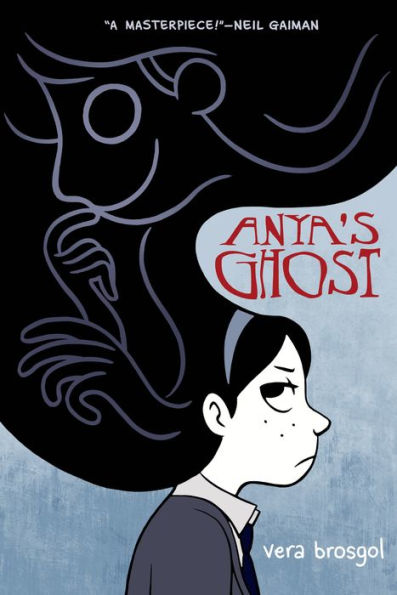 “I don’t think murder is an appropriate reaction to disappointment,” Anya. –Anya’s Ghost

Anya just wants to fit in with the other kids. But, she knows that she’s not like them. She’s embarrassed of her Russian heritage, self-conscious about her body, and she only has one friend at school. After a particularly bad day at school, Anya distractedly walks home and falls into a well.

Anya didn’t expect to find a new friend at the bottom of the well, especially not one that has been dead for a century. Anya thinks the ghost is just what she needs to make her life better. But Anya’s new BFF isn’t telling the truth about how she ended up dead in a well. Can Anya trust her ghostly BFF or will Anya’s new friend turn into her worst nightmare?

Brosgal’s fantastic artwork brings Anya’s terrible teenage years to life. The illustrations capture Anya’s conflicting emotions and her angst as she navigates high school. After Anya’s family immigrated to America, Anya was bullied which caused her to turn away from her heritage. In order to fit in, Anya has learned to talk without an accent, as well as look like all of her classmates. However, Anya still struggles with making friends, she has insecurities about her body, and she is angry about life in general. Anya’s character is incredibly real—she is snarky, sarcastic; she sulks and sneers her way through life. Although Anya acts like many teens, she is not a role model. She’s rude to her family, unmotivated to do well in school, and sneaks out of class to smoke cigarettes. Despite Anya’s negative attitude, readers can still learn powerful lessons from the less-than-perfect teen.

Anya is self-centered and only thinks about herself. At first, when Anya meets her ghost, she just wants the ghost to disappear from her life. But when the ghost helps her cheat on a test, Anya thinks having a ghost around might not be so bad. Anya is so self-centered that she doesn’t even ask the ghost her name until the ghost becomes helpful. Anya also treats a Russian boy terribly. Anya doesn’t want to associate with the Russian boy at her school because he’s “fresh off the boat.”

The story also portrays teachers in a negative way. The teacher doesn’t notice when Anya sneaks out a classroom window. Another student complains about the P.E. teacher who makes them complete the physical fitness test because “he just likes watching us run around in these stupid skirts.” Then when Anya trips in class and the other girls jump over her, the teacher says, “Ladies! If we are all done losing ourselves in Anya’s derriere, we have a test to finish.”

Despite the negative aspects of the books, the story will make readers reconsider how they treat others. The story highlights the courage it takes for teens to embrace their differences instead of trying to blend in with the crowd. Anya’s Ghost uses real-life situations and humor to show how it feels to be an outsider. Anya wishes that she was skinnier, had more friends, and had a different last name. But thanks to Anya’s spooky, demanding ghost, Anya learns to appreciate her life, even if that means embracing her Russian heritage. Anya’s Ghost is comical, compassionate, creepy, and will engage even the most reluctant readers.

“I don’t think murder is an appropriate reaction to disappointment,” Anya. –Anya’s Ghost