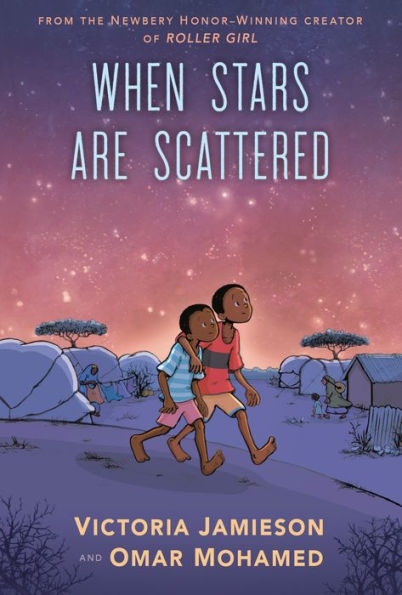 “None of us ask to be born where we are, or how we are. The challenge of life is to make the most out of what you’ve been given.” Omar. –When Stars are Scattered

Omar and his younger brother Hassan have spent most of their childhood inside the A2 block of the Kenyan refugee camp Dadaab. After fleeing from his family farm in Somalia and becoming separated from his mother, Omar’s main concern is always protecting his only remaining family member, his nonverbal brother Hassan. Not only does Omar shield Hassan from the grueling chores of finding water and cleaning the tent, but he also cares for his brother when Hassan suffers seizures, or when he is teased by the other kids for only saying one word: Hooyo—“Mamma.” Omar also hopes one day his mother will find him and Hassan, and so he keeps all days the same. So, when Omar has the opportunity to go to school, he knows it might be a chance to change their future…but it would also mean leaving his brother, his only remaining family member, every day.

When Stars are Scattered is an easy-to-read, beautifully illustrated graphic novel. Omar Mohamed’s story comes to life in this graphic novel about his childhood in a refugee camp. The story shows the heartbreaking events that lead to Omar going to a refugee camp when he was only four. Omar’s story chronicles the hunger, heartbreak, and harsh conditions he endured. The story also sheds light on other issues including women’s access to education, starvation, family loss, and the constantly looming struggle to get on the UN list that invites refugees to interview for resettlement. Despite difficulties, Omar is still able to create a sense of family and home in the midst of difficult situations.

Like all people, Omar is a complex character who struggles to make the right decisions. He also often has conflicting emotions. For example, Omar wonders if his mother is dead or alive. He thinks, “I love my mom, but sometimes I hate her for leaving us. It’s like these two feelings are tearing me apart.”

At one point, Omar wonders if school is a waste of time; however, his foster mom tells him, “Prepare yourself and educate yourself. So you can be ready when God reveals his plan to you.” Eventually,

Omar falls in love with the power of learning and the potential of resettlement. Omar begins to learn what it feels like to build a new life by focusing on what he is given, rather than remaining torn by what he has lost. It is in this way that Omar moves from searching the stars for his mother to actually feeling that, “Many years ago, we lost our mother. But maybe she is not gone. She is in the love that surrounds us and the people who care for us.”

The story teaches several important life lessons including not to judge others and to make the most of your life. Appreciating what you have is the overarching theme of When Stars Are Scattered. Omar’s best friend tells him, “I didn’t ask for this limp. But I didn’t ask to live in a refugee camp either. . . I guess you just have to appreciate the good parts and make the most of what you’ve got.” Despite his struggles, Omar makes the most of what he has been given and thanks God for the love of others.

Based upon the real-life story of Omar Mohamed, When Stars Are Scattered navigates themes of familial loss, grief, struggle, and finally, hope, all while addressing the permanent feeling of a temporary refugee camp and the heartbreak of a war-torn home country. Omar shares his story because he wants to encourage others to never give up on home. Omar says, “Things may seem impossible, but if you keep working hard and believing in yourself, you can overcome anything in your path.”

When Stars Are Scattered not only encourages others to remain persistent, but also sheds light on the conditions of the refugee camps without getting into a political debate on immigration. Instead, the graphic novel focuses on Omar’s story—his hardships, his hopes, his despair, and his desire to help others like him.

The narrative is occasionally intense and heavy in its consideration of grief and the lifestyle of a refugee, which may upset younger readers. However, the serious and very important subjects that When Stars are Scattered covers are overall presented in a digestible way for young readers. The graphics that illustrate the story are absolutely captivating for all, while the humor and uplifting optimism that perseveres throughout this novel can fill the hearts of any audience.

“None of us ask to be born where we are, or how we are. The challenge of life is to make the most out of what you’ve been given.” Omar. –When Stars are Scattered