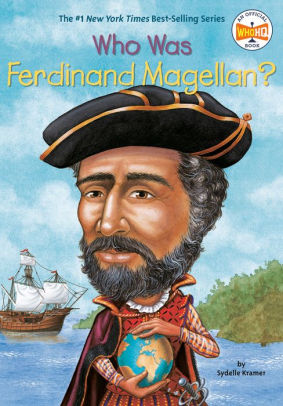 “The future looked grim. Ferdinand was thirty-five years old, lame, and unpopular. People called him Clubfoot behind his back.” -Who Was Ferdinand Magellan?

Who Was Ferdinand Magellan?

Ferdinand Magellan lived during the 1480s. His family lived in Portugal. When Ferdinand turned twelve, he went to the capital to be a page. He loved to go to the harbor and watch the ships come and go. Even though Ferdinand was poor, he dreamed of one day having his own ship.

In order to import spices, Portugal wanted to find a way to travel to India without going through Africa. When the Arab navy attacked, Ferdinand volunteered to go to war. He had hoped to gain enough wealth to become a ship’s captain. Because Ferdinand was unpopular though, no one would help him buy a ship. The King of Portugal rejected Ferdinand’s pleas for funding so Ferdinand decided to leave his country.

In desperation, Ferdinand went to Spain to seek funding. Spain’s king funded Ferdinand’s travels and with four ships, Ferdinand set out to find el paso, a straight that would allow Spain to travel to India over water. During the long trip, Ferdinand faced many hardships, including his men trying to mutiny several times. In the end, Ferdinand died in a strange land. However, his ship became the first one to circle the globe.

Ferdinand’s determination to become a ship’s captain is inspiring. Despite many obstacles, he never gives up on his dream. Because of his gruff manner, the other ships’ captains threatened to mutiny, but Ferdinand used his brains to stop them. Even though Ferdinand was a devout Christian and a bold explorer, many people disliked him because he kept his distance, and was a “gruff man who never seemed to laugh.”

Who Was Ferdinand Magellan? teaches about life in the 1400s and the conflict over the spice trade route. The book has an easy-to-read format with large font. Large black-and-white illustrations appear on almost every page. Many of the illustrations show maps, people, and objects from the time period. For example, there is an illustration of a knight’s armor, a crossbow, and a shield. Scattered throughout the book are one-page infographics that tell more about the time period, such as giving information about ships of the day. The end of the book includes a timeline of Magellan’s life and a timeline of the world.

Even though Magellan was not a likable person, his journey will inspire readers to persevere. Who Was Ferdinand Magellan? would be a good book to use for research. Additionally, anyone who wants to learn more about the time period will enjoy reading about Magellan’s journey. The wide array of illustrations and the short chapters will help keep readers’ interest until the very end.

“The future looked grim. Ferdinand was thirty-five years old, lame, and unpopular. People called him Clubfoot behind his back.” -Who Was Ferdinand Magellan?