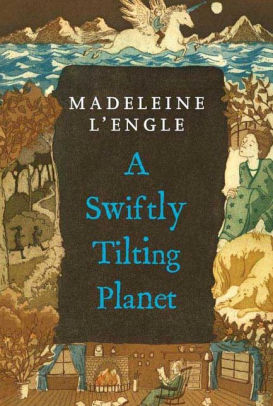 “‘Not a song,’ Mrs. O’Keefe contradicted. ‘A rune. Patrick’s rune. To hold up against danger. In this fateful hour I place all Heaven with its power.’” –A Swiftly Tilting Planet

When Mad Dog Branzillo, a leader of a small South American country, develops nuclear weapons, it seems the end of the world is at hand. Mad Dog is a crazy man full of hate who would be willing—eager even—to destroy the world. When Meg’s family hears this, there seems to be nothing to do but wait for the end of the world. But Mrs. O’Keefe, Meg’s mother-in-law, is suddenly reminded of an old Irish rune that her grandmother taught her about when she was a child. The rune is supposed to have great power, but can only be used in the time of greatest need.

Meg’s little brother Charles Wallace decides to use the rune. When he does so, he is sent a unicorn who can ride the winds of time. The unicorn tells him that history is full of Might-Have-Beens, where a single decision could change the course of history. To save the world, the unicorn takes Charles Wallace back in time and sends him ‘within’ the lives of several people—from the first Native American settlers to the Civil War period. As a passenger in these people, Charles becomes them. He sees what they see and hears what they hear. But he is able, perhaps, to nudge them in a better direction and change the vital Might-Have-Beens that lead to Mad Dog Branzillo.

L’Engle’s book is an allegorical tale that explores the battle of good and evil that started when the fallen angels were banished from heaven. While most of the story is phrased in terms of good and evil, there are points where the unicorn mentions heaven, angels, and other biblical concepts explicitly. In addition, when Charles Wallace visits a settlement in the time of the Salem Witch Trials, God is discussed frequently and scripture is used both by the pastor trying to condemn a woman and by the man defending her.

A Swiftly Tilting Planet is all about the importance of choices, even those that seem small. It explores two family lines: one family who leaned toward violence and hungered for power, and another family who promoted peace and friendship. The two family lines parallel the struggle between good and evil, heaven and darkness. While the story is enjoyable and full of good messages, there are many characters that Charles interacts with throughout history whose many names may become confusing for less advanced readers. For those able to follow the complicated family lines and keep track of the many names, A Swiftly Tilting Planet is yet another fun ride in the Time Quintet.

“‘Not a song,’ Mrs. O’Keefe contradicted. ‘A rune. Patrick’s rune. To hold up against danger. In this fateful hour I place all Heaven with its power.’” –A Swiftly Tilting Planet