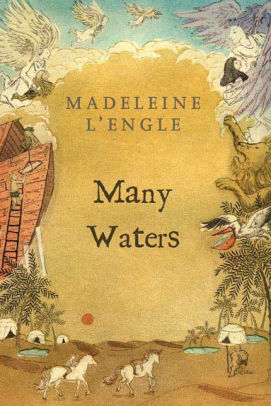 “The pattern is not set. It is fluid, and constantly changing. But it will be worked out in beauty in the end,” the seraphim. –Many Waters

When identical twins Dennis and Sandy accidentally mess with their father’s scientific experiment on faster-than-light travel, they are transported to a desert wasteland. Stranded and confused, the two boys meet the locals—dark-skinned people who are only four feet tall. Between the strange people, the miniature mammoths, unicorns, and manticores, Sandy and Dennis are convinced they’re on a strange planet on the other side of the universe. After nearly dying from heatstroke, they are taken in by Grandfather Lameck. When they meet Grandfather Lameck’s son, Noah, the twins realize they have been thrown back in time and are on Earth in the time right before the Great Flood. But the flood is coming—will the twins find a way home before the rain starts to fall?

To make matters more complicated, humans are not the only intelligent beings to deal with. There are seraphim, a tall and beautiful winged people who know many things—maybe even how to get the twins home—but the seraphim do not like to interfere with the lives of men. Then, there are the nephilim, just as tall and beautiful as the seraphim, but they spend their time seducing women with worldly pleasures and extravagant treasures. The nephilim are suspicious of the twins’ sudden appearance, and they will do anything to find out what they are up to.

Once again, L’Engle spins a magical tale that centers on the battle between good and evil. Yalith and Jephath, two of Noah’s children, are kind people that do all they can to help the twins. But most people who live in the oasis are corrupt and evil, abandoning tradition to pursue pleasure and to get ahead in life. The twins and Yalith are all tempted to give in to worldly pleasures. While conflicted, all three reject temptation in exchange for kindness, unicorns, and listening to the stars.

While there are good and bad characters, several members of Noah’s family and Noah himself are more ambiguous, showing that even godly people are not perfect. While God is mentioned several times as “El,” the story centers more around the twins as they adapt to the time period and try to find a way home. The seraphim and the nephilim are revealed to be angels and fallen angels, respectively. They add intrigue and excitement to the story. Overall, Many Waters is a fun tale with a unique twist on the story of Noah’s Ark that will leave readers satisfied.

“The pattern is not set. It is fluid, and constantly changing. But it will be worked out in beauty in the end,” the seraphim. –Many Waters