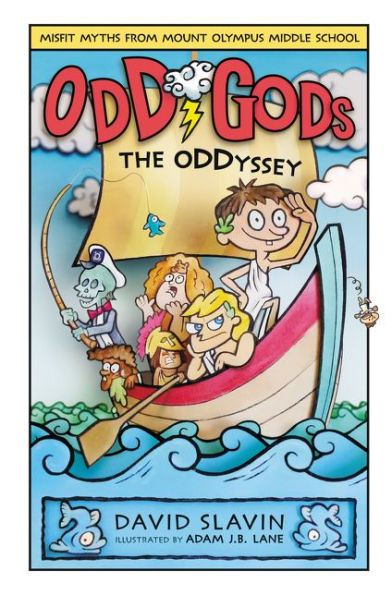 Other books by David Slavin

“We adults are powerless against the Siren song of video games,” Deadipus. –The Oddyssey

Sometimes it feels like Oddonis can’t do anything right—especially compared to his perfect twin brother, Adonis. But this time, Oddonis really messed up. He accidentally turns his father, the all-powerful king of the Gods, Zeus, into a giant baby! Now Oddonis must assemble a team and journey to the underworld to reverse the curse and rescue Mount Olympus. Along the way, he’ll have to overcome a series of dangerous obstacles—like his obnoxious brother, his own self-doubt, and the horrible farts of his best friend, Gaseous! Can Gods as unlikely, unusual, and unheroic as Oddonis and his friends really save the day?

Unlike most stories, The Oddyssy’s heroes are not perfect, beautiful, or even brave. Many readers will relate to Oddonis who struggles with feelings of inferiority. Despite this, he agrees to travel to the Underworld and talk to Hades in order to reverse the spell. Throughout the journey, Adonis wants to use strength to attack his enemies. However, Oddonis and the other odd gods are able to complete the journey because of “their quick thinking, their ingenuity, and their diplomacy skills.” In the end, Adonis learns a powerful lesson: “the power of using your brains, instead of your fist.”

Like Odysseus in The Odyssey, Oddonis must face trials and tribulations on his journey. The fast-paced, funny story gives The Odyssey a unique spin. However, the story uses immature humor that revolves around farts, underwear, and puns. For example, when toddler Zeus goes outside naked, the illustration shows Zeus with a blurred groin. In addition, some of the humor is odd; for example, when Oddonis and his crew go to Mumce’s island, she wants them to call her Mumzy Wumzy because she “wants to be a mommy. Mumzy Wumzy NEEDS to be a mommy. And you will all be Mumzy Wumzy’s children. . . forever!” Oddonis and his crew are able to defeat Mumce by acting like bratty children.

Readers who enjoy The Treehouse Series by Andy Griffiths & Terry Denton and The Misadventures of Max Crumbly Series by Rachel Renée Russell will also enjoy the Odd Gods Series. Even though The Oddyssey is not a graphic novel, it has easy vocabulary, short paragraphs, and humorous black-and-white illustrations on every page. While the story has some juvenile humor, the story will entertain readers and has a positive message about using your brain instead of brawn.

Other books by David Slavin

“We adults are powerless against the Siren song of video games,” Deadipus. –The Oddyssey