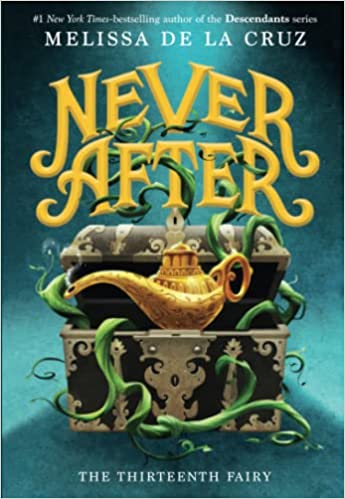 “Serial killers or wicked criminals or evil fairies do not exist in her world, at least not in safe, sleepy, sunny North Pasadena, where nothing ever happens. Or . . . she thought they didn’t. They’re not supposed to, anyway.” –The Thirteenth Fairy

The Chronicles of Never After #1

In the quiet and uneventful town of North Pasadena, California, Filomena Jefferson-Cho finds adventure with her favorite book series, Never After, where magic and fairy tale characters exist. On her way to purchase the thirteenth and final book of the Never After series, Filomena discovers strange things have been happening.

First, the author of the series has mysteriously disappeared. Second, Filomena is being followed by a strange boy dressed as Jack Stalker, the main hero of the Never After books. Deciding the boy is just a Never After fan and not a potential murderer or kidnapper, Filomena turns to greet him but is interrupted by the sudden crash of a thunderbolt and the shrieking sound of an ogress. As she flees from danger, Filomena realizes the boy following her is in fact the real Jack Stalker and, Never After, a world full of famous fairy tale characters, is real.

Filomena inadvertently follows Jack and his best friend, Alistair Bartholomew Barnaby, to Never After where she finds the kingdom in a state of distress after the thirteenth fairy, Carabosse, stole Princess Eliana. As a result of Carabosse’s disappearance, the evil ogre queen, Olga has taken over the land.

In her first visit to Never After, Filomena fights ogres and meets the fairy, Zera, who sees a strange resemblance between Filomena and her sister, Carabosse. Zera reveals that Filomena possesses the fairy mark which shines brightly as a crescent moon on Filomena’s forehead. Confused, Filomena rejects her fairy mark and leaves Never After. Although she always wondered about her biological parents, Filomena is reluctant to accept that she is from Never After. However, upon her return to North Pasadena, Filomena finds her Never After books have changed and Filomena returns to Never After to help her friends, even if it means leaving behind the safety of North Pasadena and acknowledging her true identity.

This novel is an exciting book for young, middle-grade readers because it combines fairy tales and reality and mixes familiar characters with new stories. The book follows Filomena’s story, but short prologues are scattered in between chapters to provide context to the history of Never After.

Traveling to and from the magical and mortal world, Filomena and other recognizable fairy tale characters fight trolls, outsmart dragons, ride motorcycles with wolves, and perform spells in their quest to stop the ogres and save Never After.  The Thirteenth Fairy is a fast-paced story full of adventure and inspiring characters. Throughout the book, Filomena learns the importance of friendship, family, and believing in yourself. Before her adventures in Never After, Filomena was unsure of herself and where she belonged. Although she is loved by her adoptive parents, she is an outcast at school, and she is losing faith in herself. However, with help from her new friends, Filomena discovers her inner courage and strength. Filomena learns that you can achieve anything as long you believe in yourself and trust the friends and family who have your back.

“Serial killers or wicked criminals or evil fairies do not exist in her world, at least not in safe, sleepy, sunny North Pasadena, where nothing ever happens. Or . . . she thought they didn’t. They’re not supposed to, anyway.” –The Thirteenth Fairy