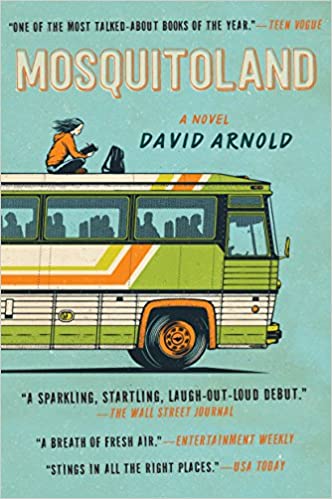 “Writing sort of…. rounds off the sharp edges of my brain…. Either way, you should write. It’s better than succumbing to the madness of the world.” Aunt Isabel. – Mosquitoland

After the sudden and unexpected divorce of her parents, Mim Malone is dragged from her Ohio home. Mim’s happy life collapses when she’s forced to live with her father and his new wife in “Mosquitoland,” otherwise known as the middle of Mississippi.

When Mim overhears a conversation, she finds out her mother is sick, and something in Mim snaps. Mim runs home, packs a bag, steals her stepmother’s stash of money, and boards the next Greyhound bus out of town, starting her almost thousand-mile journey from Jackson, Mississippi to Cleveland, Ohio.

On her bus is a cast of quirky characters—some annoying, some creepy, and some, like her seatmate Arlene, kind. When the Greyhound bus tips over in the middle of a rainstorm, what would have been a straightforward trip, spirals into an interesting journey into the unexpected. On this new journey, Mim finds unexpected friends in Beck, a college student on a trip to find his old foster sister, and Walter, a boy Mim’s age with down syndrome, who is homeless. With the help of these new friends, Mim begins to realize she is not alone in this world, and that while she is struggling with events in her life, she does not have to struggle alone.

While the trip started as a plan to see her mother, Mim’s trip morphs into a journey of self-discovery and acceptance. Mim is a strong-minded and independent, but also an imperfect person. She describes herself as a “collection of oddities, a circus of neurons and electrons.” Mim explains “my heart is the ringmaster, my soul is the trapeze artist, and the world is my audience. It sounds strange because it is, and it is, because I am strange.” Readers will relate to Mim because she does not strive to be perfect. Instead, she recognizes her quirks and problems, and, as a teenager, she knows she still has much to learn.

Throughout Mosquitoland, Mim explains that she is “not okay.” She struggles with an unspecified mental illness, and her world seems to be falling apart because her family fractured when her parents divorced. At first, Mim is attempting to go home, back to the life she had with her mother in Ohio, but throughout the trip, she realizes “home is hard.” She learns that she will never have her old life back – a life she somewhat idolizes – and that leaving her old life behind is for the better. Mim realizes that home is not a “place or a time,” maybe “home is the heart . . . an organ, pumping life into my life.”

Mosquitoland is beautifully written, with witty dialogue and memorable characters. The story is written from Mim’s point of view, who has a very unique narrative voice. Readers get insight into her perspective of the world and her hilarious internal dialogue on various topics, including baseball games, shop signs, and teenage girls. Moreover, her point of view is interspersed with letters to her unborn sister, explaining why she decided to leave Mississippi and documenting her feelings about the trip.

Mosquitoland explores the heavy subject matter of mental illness and sexual assault. Mim explains that throughout her life, she has often questioned her sanity and her father has often thought there is something wrong with her. Mim goes to psychiatrists and therapy and is prescribed medication, but often questions if this medication is necessary. Mim’s family has a history of mental illness. Mim’s aunt committed suicide and her mother is currently hospitalized for depression. This book also discusses sexual assault, as an older man forces himself on Mim and kisses her. This experience traumatizes Mim and she often has flashbacks to this moment. Plus, she becomes anxious around men who remind her of the man who assaulted her. Furthermore, she feels incredibly guilty for not speaking up about this man’s actions before he assaults another girl. Mim shows the readers her vulnerability in these moments, the tough persona she presents to the world is broken down, and readers see Mim as someone who is just trying to figure life out and survive.

Overall, Mosquitoland is a funny and entertaining book, with memorable, relatable characters. While it does touch on some difficult topics, this is balanced with a lighthearted tone and humorous plot. Beyond being a coming-of-age story about Mim coming to terms with her life and finding herself, it is also a story about the power of friendship.

“Writing sort of…. rounds off the sharp edges of my brain…. Either way, you should write. It’s better than succumbing to the madness of the world.” Aunt Isabel. – Mosquitoland