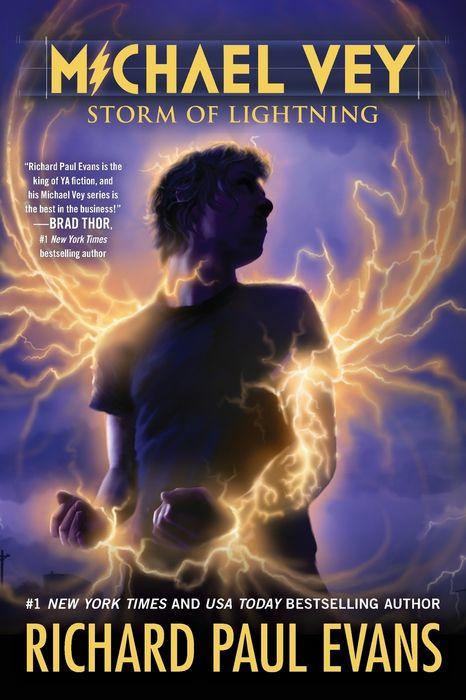 Michael thinks, “This was likely a suicide mission. The odds of some, or all of us being killed were high. But that was true too if we did nothing to stop the Elgen. This was what our resistance was all about.”–Storm of Lighting

The Elgen’s plans for world domination begin on the island of Tuvalu when the nefarious Dr. Hatch orders an invasion of the small nation following an unsuccessful attack on the resistance headquarters, the Timepiece Ranch. Meanwhile, the Electroclan return to America with Jade Dragon, the girl they rescued before she fell victim to Dr. Hatch’s schemes. When they learn what happened to the Ranch, Michael and the others rush there to inquire about the safety of their families, who were hiding at the base at the time of the attack.

After checking the Ranch and finding it devoid of survivors, the Electroclan goes on the run again. Their plan is to lie low until news of their families reaches them, but their period of rest ends abruptly with the news that Dr. Hatch has stationed warships from the Elgen fleet in the waters near Tuvalu. The Electroclan heads to Christmas Ranch in Utah, another resistance base, to devise a plan to stop the invasion of Tuvalu.

Meanwhile, the story shows the perspective of Hatch’s loyal electric children (Tara, Bryan, Quentin, and Kylee) as they discuss whether to rebel against Hatch, especially after he tortures Welch, a former Elgen commander, who is close to Quentin. Quentin has been Hatch’s “favorite,” but he no longer knows if Hatch’s plans align with his own.

Hatch successfully overthrows the Tuvaluan government and places Quentin in charge. Hatch offers Quentin advice on his new monarchy: “a divided people is a conquered people. . . Divisions in humanity can always be found. Turn men against women and women against men. Divide the young from the old, the rich from the poor. . . Teach them to shame others and to use shame as a tool to their own ends.” Hatch’s advice illustrates the difference between him and Michael, which is the focus of Storm of Lightning.

There is not much confrontation, and the Electroclan spends most of the book on the move, as the story focuses on Michael’s character and the effects of war. It’s clear that the Elgen and the Electroclan can never coexist, and Michael must be the one to stop them. He struggles with wanting to give up, and the fact that his power has been increasing, possibly leading to his own death. His power also gives him the ability to kill others on a large scale. While this threat has been present from the beginning of the series, Michael grapples with it throughout Storm of Lightning.

While Storm of Lightning is not the most interesting book in the series, the story discloses the next step of the Electroclan and highlights the value of hope – hope that the resistance can overcome the Elgen. While Michael’s role in the war is may be unrelatable to readers, Michael’s inner turmoil is understandable and crucial to the development of his character. Readers should pick up the next story, Fall of Hades, to find out if Michael is able to overcome his fate and confront Hatch once and for all.

Michael thinks, “This was likely a suicide mission. The odds of some, or all of us being killed were high. But that was true too if we did nothing to stop the Elgen. This was what our resistance was all about.”–Storm of Lighting