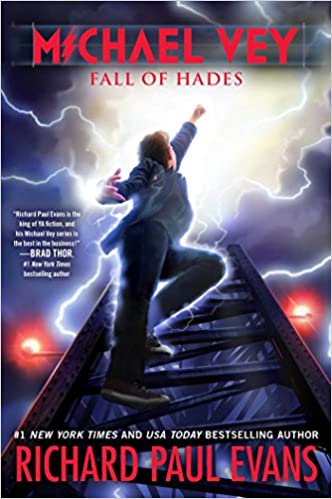 “Everyone must come to the realization that the life they have and the life they thought they’d have aren’t ever the same thing. And then the question is, what are they going to do about it?” Michael Vey. – Michael Vey: Fall of Hades

Now that the small island nation of Tuvalu has become the base of Dr. Hatch’s operations, Michael and the Electroclan plan to stop him by taking down the Elgen’s floating treasury, a ship named the Joule. In addition, Dr. Hatch’s remaining loyal electric children have turned against him. Before Hatch can have them executed for treason, Michael wants to rescue them, along with the innocent Tuvaluan citizens who have become prisoners on the island the evil doctor renamed “Hades.”

A bloody battle ensues at a prison in Hades during an intense storm. A few of the Electroclan, such as Tanner and Gervaso, die in the fight. At the end of the book, Michael climbs a tower to get struck by lightning. The subsequent massive explosion ends the battle, though Hatch escapes from the island. The Joule is destroyed and Hades has fallen, but Michael, the symbol of hope for the resistance, is gone.

This installment of the Michael Vey series dedicates a large amount of time to the story’s minor characters, often skipping from the action to flashbacks or other characters’ dilemmas. While it can be distracting from the main plot, readers who have followed the story until now will want to keep reading to see if Michael can finally defeat Hatch. Because Michael is fighting an all-out war, the events may be difficult to connect to, but readers will likely sympathize with Michael’s motives. Michael believes that the best sacrifice is the one made for others, even if isn’t successful. He says, “I’m fighting a battle for humanity. Of course, I could die and not win any victory, but I think that’s got to be worth something too.”

Though this book ends with Michael’s disappearance, picking up the last book is a must. The most moving part of the story is Michael’s climb up the tower, where he reflects on the journey he has taken with his friends and family. “So many memories. Most of them recent, it seemed. I suppose I had lived more life in the last year than most people live in eighty. That was good. Because I knew mine was coming to an end.” The final book of the series, Michael Vey: The Final Spark explores what motivation remains for the Electroclan once Michael is gone and whether they can keep the fight alive in Michael’s memory.

“Everyone must come to the realization that the life they have and the life they thought they’d have aren’t ever the same thing. And then the question is, what are they going to do about it?” Michael Vey. – Michael Vey: Fall of Hades