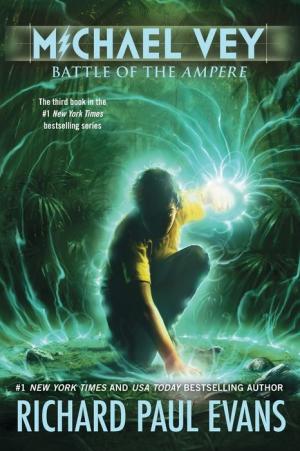 “Every idea starts with just one person,” Michael Vey. –Battle of the Ampere

Battle of the Ampere

After sacrificing himself for the successful destruction of the Starxource plant, Michael is lost in the Peruvian rainforest. He’s rescued by a group of natives named the Amacarra tribe, who are also sheltering another one of Hatch’s electric children: Tessa. From Tessa, Michael learns that the Elgen have a fleet of boats, including the Ampere, where the head of the Elgen corporation resides. Michael’s next goal is to track down Hatch who lived through the destruction of the plant and seized control of the Ampere which is his new base of command. But first, Michael must reunite with the Electroclan if he wants to have any hope of taking Hatch down.

Battle of the Ampere is broken into three parts. The first part follows Michael and Tessa’s journey through the jungle with Jaime, their guide, who works for the unnamed resistance against the Elgen corporation. The resistance is headed by someone who Michael calls “the voice.” The voice wants the Electroclan to sink the Ampere to put a stop to Hatch’s plans.

The second part of the book details the fate of the remaining Electroclan members. The Peruvian government declared the Electroclan terrorists after the destruction of the Starxource plant left much of Peru without electricity. It’s up to Michael and Tessa to rescue them from prison.

Lastly, the book covers the sinking of the Ampere, which puts a dent in Hatch’s plans. Unfortunately for the Electroclan, Hatch still escapes with his life and the other electric children. This book is an important read because the Electroclan is tested in ways it hasn’t been before: losing one of its members. Wade dies during the group’s escape from the Peruvian army. Michael reflects that “Grief is a powerful force that settles in the heart like a dark, heavy fog.” The group certainly feels the weight of grief as they split up; some of them choose to return home rather than continue to risk their lives to sink the Ampere. Michael says that the split hurts him, “not just because I was losing my friends, but because deep inside I really wanted to go home with them.” Even though the decision is hard, Michael still chooses to do what he thinks is right.

Things look especially grim at the climax of the novel when Hatch locks the Electroclan in the engine room of the Ampere. The group decides to ignite the bomb they have with them, sacrificing themselves so that they can sink the ship and take Hatch down with them. However, at the last moment, they are rescued by other members of the Electroclan who decided not to return home after all. Upon reuniting, Abigail says to Michael, “You said not to regret my decision. I couldn’t. If something had happened to you, I would have regretted it the rest of my life.”

Battle of the Ampere is darker than the last installment, but it highlights a worthwhile message of sticking by loved ones even when the odds are against you. When the Electroclan wants to give up, Michael emphasizes that they should not let Wade die in vain by letting the Elgen win. The story addresses the grief that comes with losing friends, but it also shows how to preserve their memory. At the end of Battle of the Ampere, Hatch escapes once again, but the Electroclan have learned an invaluable lesson: they are stronger together than apart.

“Every idea starts with just one person,” Michael Vey. –Battle of the Ampere