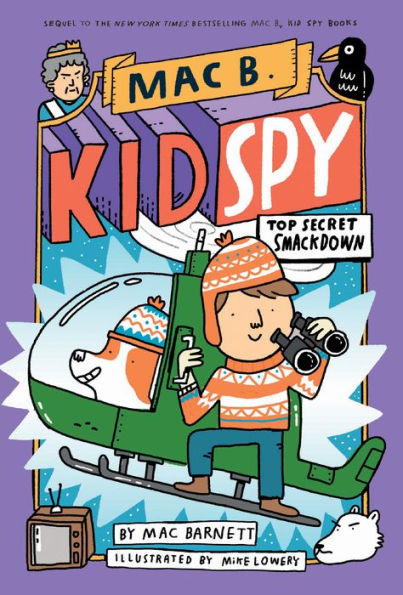 “Mac,” said the Queen. “You must recover the Tower’s ravens. If you do not, my reign will end! Britain will be lost! We are counting on you!” –Top Secret Smackdown

Ravens have been stolen from the Tower of London! Mac B.’s top-secret mission? Travel to Iceland and retrieve the ravens. . . or Britain is ruined!

In Iceland, Mac discovers secret submarines, hungry polar bears, mysterious blueprints, and his old archnemesis! Is the KGB man behind this birdnapping? Can Mac get the ravens to safety? It’s time for an epic, top-secret smackdown between these two secret agents!

The third installment of the Mac B. series continues the punny fun. Mac learns more about the United Kingdom’s history as well as the difference between dolphins and porpoises. Mac discovers how a simple story can become an important legend. The queen of England orders Mac to travel to Iceland and solve the mystery. Even though the majority of the story focuses on the mystery of the missing ravens, Mac’s difficulties with his mother’s boyfriend also plays a part in the story.

The queen’s outlandish behavior will make readers giggle. Readers will enjoy the conclusion because it ties all of the events together in a unique way. Top Secret Smackdown mixes humorous puns, a mysterious enemy, and wrestling to create a fun story that will entertain even the most reluctant readers. Short sentences and simple vocabulary will help readers build confidence. Large purple and orange illustrations appear on almost every page, which helps readers envision the story’s events.

Mac tells his own story with humor and puts a spotlight on the absurd. Younger readers will love the adventure, intrigue, and interesting characters. Although Top Secret Smackdown can be read as a stand-alone book, for maximum enjoyment the books should be read in order. Readers who enjoy silly, illustrated stories may also want to read Two Dogs in a Trench Coat Series by Julie Falatko.

“Mac,” said the Queen. “You must recover the Tower’s ravens. If you do not, my reign will end! Britain will be lost! We are counting on you!” –Top Secret Smackdown