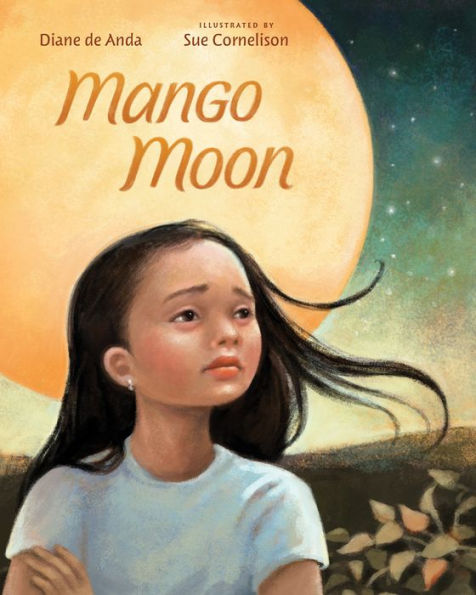 Mama “tells me love is like the orange moon, that Papi and I feel its glow no matter where we are,” Maricela. –Mango Moon

One day Maricela’s father doesn’t come home. With her father in a detention center awaiting deportation, Maricela’s whole life changes. Her mother has to work two jobs, her family had to move in with Maricela’s aunt, and she has to change schools.

Maricela misses her father so much that it makes her stomach hurt. And everywhere she looks, she’s reminded that her father is gone. She misses him pushing her on the swings. She misses him coaching her soccer team. And she misses him whenever she sees the moon, the bright orange moon that is just like the mango Maricela was eating the last time she and her father looked at the night sky together from their porch.

Mango Moon tackles the difficult topic of deportation by focusing on one girl’s struggle. Maricela and her brother were born in the United States, and her mother has a visa. But Maricela doesn’t understand how her father can be sent to a dangerous county because “Papi never did anything wrong; he just didn’t have papers.”

While Mango Moon doesn’t talk about the political aspect of immigration, the story does show the devastating effects of families being separated. Unlike many stories, Mango Moon doesn’t end on a happy note. Instead, Maricela expects her father to be sent to another country, alone. Like many children of undocumented immigrants, Maricela is teased at school which only adds to her worries. Maricela’s story is heartbreaking because it shows how Maricela’s life is shattered.

Any parent who wants to broach the subject of immigration should read Mango Moon with their child. Even though the story is a picture book, young readers will need help understanding the difficult subject. De Anda writes about immigration’s hardships in a child-friendly manner that shows it is “all right for us to cry.” Many children may face similar hardships to Maricela, and Mango Moon can help them process the confusing emotions of having a parent deported. Even if you are not in a similar situation, Mango Moon can help kids grow empathy and understand the pain of losing a parent.

Mama “tells me love is like the orange moon, that Papi and I feel its glow no matter where we are,” Maricela. –Mango Moon