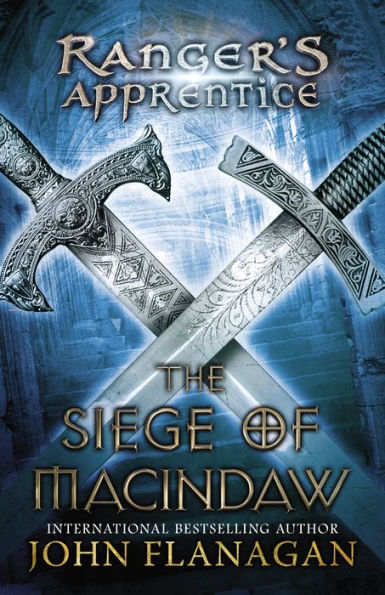 “Think of the positive outcome, and you will achieve it. Allow doubt to enter your mind, and the doubt will become self-fulfilling,” Will. –The Siege of MacIndaw

The kingdom is in danger. Renegade Knight Sir Keren has succeeded in overtaking Castle MacIndaw and now is conspiring with the Scotti. The fate of Aralean rests in the hands of two young adventurers: the Ranger, Will, and his warrior friend, Horace. Yet for Will, the stakes are even higher because inside the castle, held hostage, is someone he loves. Now the time has come for this once apprentice to grow up.

Will and Horace join together to free Alyss, defeat Keren, and return the castle to its rightful leader. Along the way, Will and Horace must work with the Sorcerer of the North and the Skandians. As the allies work together, they learn that things are not always as they seem. The group of unlikely allies will put their lives on the line when they siege the castle MacIndaw.

Fans of the Ranger’s Apprentice series will enjoy this action-packed story that shows Will’s and Horace’s personal growth. They are no longer apprentices who can rely on others for advice. In order to survive, they need to use their individual strengths to overcome Sir Keren. Unlike previous books in the series, Sir Keren is a well-developed villain who shows moments of weakness and uncertainty. Sir Keren’s behavior highlights the importance of keeping a vow and the unintended consequences of being an oath breaker.

The sixth installment of the Ranger’s Apprentice series is full of action, intrigue, and unexpected twists. The story explores how people react to things that they don’t understand. When strange lights are seen in the forest, people believe that a powerful sorcerer is using black magic. Will and Horace are able to use this belief to their advantage. Even though the reader knows that the “sorcerer” uses illusions to trick people, the illusions still add interest to the story.

The Siege of MacIndaw ends with an epic battle. However, the battle for MacIndaw is more violent, bloody, and descriptive than the previous books. In The Siege of MacIndaw both Will and Horace have grown into adults, so the story hits on more mature topics such as loyalty, love, and sacrifice. However, the story leaves the reader with a satisfying picture of Will and Horace, who have built a stronger friendship and turned into trustworthy men who have each other’s backs. The Siege of MacIndaw will satisfy fans of the Ranger’s Apprentice series and leave readers reaching for the next book, Erak’s Ransom.

“Think of the positive outcome, and you will achieve it. Allow doubt to enter your mind, and the doubt will become self-fulfilling,” Will. –The Siege of MacIndaw