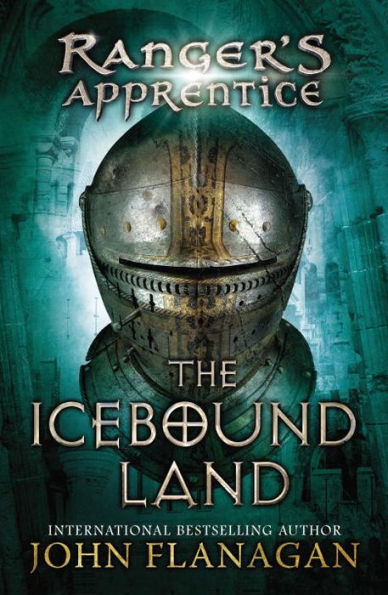 “Being brought up as a princess had definite disadvantages. She could organize servants and sit for hours, straight-backed and apparently attentive, through the most boring official ceremonies. All valuable skills in their right place, but none of them was much use to her in her present situation,” Evanlyn. –The Icebound Land

After a fierce battle with Lord Morgarath, Will and Evanlyn are captured. Erak, a Skandian warrior, forces Will and Evanlyn onto a ship destined for Skandia. Erak plans to sell the two young people as slaves. When the group returns to Skandia, Will and Evanlyn are separated. Their lives are full of grueling work, freezing cold nights, and hopelessness. Will the two ever be able to find each other? And if they do, is there any chance of escape?

Halt, determined to rescue his young apprentice, purposely defies the king. Expelled from the Rangers, Halt is joined by Will’s friend Horace as he travels toward Skandia. On their way, freelance knights block their way, demanding tribute. Unwilling to pay to pass every bridge, Horace uses his combat skills to challenge the knights. Unknowingly, Horace has attracted the attention of an evil warlord, Deparnieux, who plans to kill the young knight to prove his power. Deparnieux traps Halt and Horace, taking the two captive. Halt patiently watches, trying to learn the key to defeating Deparnieux and continuing the journey towards Skandia. Will Halt and Horace free themselves in time to rescue Will?

Unlike the two previous books, The Icebound Land focuses more on the characters’ individual struggles. Even though Will is held captive, his master, Erak, soon comes to respect the boy and he recognizes that Will is an honorable warrior. Erak tries to keep the two slaves, Will and Evanlyn, together. However, Erak is unwilling to let the two free.

After Erak takes a short journey, he returns to find Will addicted to the powerful narcotic, warmweed. Erak decides to help Will and Evanlyn escape. Erak knows that Will’s death is fast approaching, and the only way to save Will is to help him escape. Erak helps Will because “a boy like that, he’s a real warrior. He may only be knee-high to a gnat, but he’s got the heart of a true Skandian.”

While Evanlyn and Will hide out in a camping cabin, Halt and Horace are fighting their own battle. As Deparnieux’s prisoners, the two are faced with countless hours of boredom and must patiently watch Deparnieux’s cruelty. Halt knows the key to their survival is patience, but how long can they watch Deparnieux terrorize and kill others?

The Icebound Land has a darker tone than the other two books because it focuses on slavery, drug addiction, and the abuse of power. Throughout the story, several people abuse their power and treat others cruelly just because they can. The slaves are not immune to this problem. One slave, who is in charge of the others, purposely gets Will addicted to warmweed because Will stopped the man from beating a young slave. Erak is the only supporting character that shows kindness, but that kindness was born out of respect for Will.

As the third installment of the Ranger’s Apprentice series, The Icebound Land has less action than the previous books. However, readers who are familiar with the main characters will want to know what happens next. The Icebound Land continues to teach the importance of not being boastful or overconfident. The story does not wrap up any of the plot points, but instead ends in a cliffhanger. Readers will want to jump into The Battle for Skandia as soon as they finish the last page of The Icebound Land.

“Being brought up as a princess had definite disadvantages. She could organize servants and sit for hours, straight-backed and apparently attentive, through the most boring official ceremonies. All valuable skills in their right place, but none of them was much use to her in her present situation,” Evanlyn. –The Icebound Land