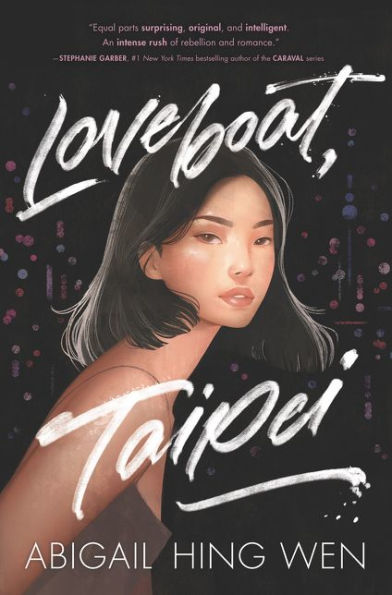 “My parents sent me here to discover my heritage, but in the process, I’m also finding parts of myself, even if that self isn’t who they want me to be,” Ever. –Loveboat, Taipei

Ever Wong’s parents came to America with little, but they were determined to make a better life for their children. Ever’s father, a talented doctor, was unable to obtain a medical license in the US and the family is barely scraping by. The Wongs are determined to see their daughter become a doctor. The only problem is that Ever has very little talent for medicine and would much rather go to dance school.

Ever wants to spend her summer dancing with her friends, but her parents have different plans for her. Ever’s mother pawns her most valuable jewelry to pay to send Ever to a rigorous pre-med program. Then Ever’s mother sends her to Chien Tan, a summer program designed for Chinese-American high school students learn about their culture through eight weeks in Taipei, Taiwan.

In Taipei, Ever finds herself among a Chinese-American majority for the first time in her life, but she also discovers that many of her peers have grown up quite differently from her. Most of the Chien Tan students have enormously wealthy parents, and nobody else has had to pawn jewelry to pay for their airfare. Many of Ever’s peers are fluent or near-fluent in Mandarin, which Ever never learned.

Sophie, Ever’s roommate, tells her that Chien Tan has the nickname “Loveboat.” It’s the status quo for students to sneak out at night, go clubbing, and abandon their boyfriends and girlfriends back in the States for intense, short-lived love affairs. Away from her family for the first time, Ever begins to break all of her parents’ strict rules: she drinks, dresses immodestly, and kisses boys. She finds herself caught in an intense love triangle between golden-boy Rick and mysterious bad-boy Xavier.

Loveboat, Taipei addresses many issues that readers may find relatable: the pressure of overbearing parents, the pressure to get drunk or have sex for the first time, and the complicated feelings one can have over cultural identity. The romance is well-written and the love triangle is cute, but readers may find it hard to believe that the two most popular boys in Loveboat are both so smitten with the likable, but unassuming, Ever.

Much of the book’s plot concerns the drama around Ever’s love triangle. Through Ever’s perspective, readers see background characters work through their own drama, too. The cast of characters is large to start with, and it gets confusing when the book names too many extra characters who aren’t part of the plot and only exist to populate the background.  Chien Tan gives unbridled freedom to kids on the cusp of adulthood. They form hasty relationships, hurt themselves, and hurt each other—emotionally and sometimes physically. For example, Sophie spreads nude photos of Ever out of spite. Readers may think this was unforgivable, but they eventually make up.

Ever’s frustration with her parents is a major theme; despite their disagreements, the family clearly loves each other. The narrative reflects the nature of this complicated relationship. Ever learns to stand up for herself and exercise her new freedom staying true to her own values. Loveboat, Taipei will be a compelling choice for readers looking to read about culture, class differences, and “leaving the nest”.

“My parents sent me here to discover my heritage, but in the process, I’m also finding parts of myself, even if that self isn’t who they want me to be,” Ever. –Loveboat, Taipei