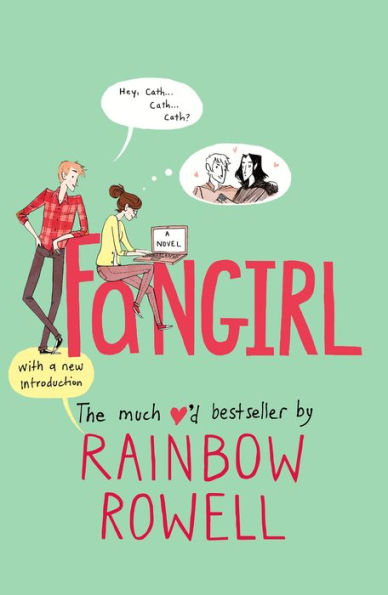 "It's not just that… I don't like new places. New situations. There'll be all those people, and I won't know where to sit—I don't want to go," Cath.  –Fangirl

Cath is the world’s biggest Simon Snow fan. Simon Snow is her everything—his magical world consumes Cath until her entire world revolves around it. Ever since she was little, she and her twin sister Wren poured over the series, continually reading and re-reading, and eventually writing. In Cath’s case, writing an extremely popular fanfiction that has hundreds of thousands of followers. Cath loves being immersed in this fictional world with her sister, but she must soon face reality.

Cath’s freshman year of college is quickly approaching, and in addition to having to pull herself out of her Simon Snow hole, she has to deal with an entirely new obstacle— her sister. As they have been best friends for the entirety of their lives, Cath is shocked when Wren suddenly decides that she does not want to be roommates for their freshman year. This causes Cath’s social anxiety to spiral as she attempts to survive in a new collegiate world without her sister.

Cath is grappling with her pressure-filled, Simon Snow fanfiction and the rough transition to college. Additionally, her emotionally fragile, single father is alone for the first time in eighteen years, and she can’t help but worry about what might happen to him in her absence. She also must confront new feelings towards a male classmate who only seems to want to talk about writing, and a wild roommate with a fascinating best friend.  Can Cath hold it all together while the world around her feels like it is all falling apart?

Fangirl is a delightful coming-of-age novel that accurately encapsulates the strong emotional response to the transition to university. Cath’s struggles with her mental health and social anxiety are relatable to modern-day teens, particularly those leaving home for the first time. Her relationship with her sister represents the drifting apart from friends and siblings that can occur as a person grows up.

Despite this novel’s enthralling story and heartfelt characters, Fangirl may not be appropriate for younger audiences. As it is set in college, there are mature events and themes. Sexuality, alcohol, and drugs are discussed often, making the story more appropriate for older readers.  Fangirl is also a long and semi-difficult book due to more advanced vocabulary and complex plot lines, making it tough for less advanced readers. For mature readers, Fangirl will be a highly enjoyable read that delves into the depths of a teen’s emotions and life.

"It's not just that… I don't like new places. New situations. There'll be all those people, and I won't know where to sit—I don't want to go," Cath.  –Fangirl