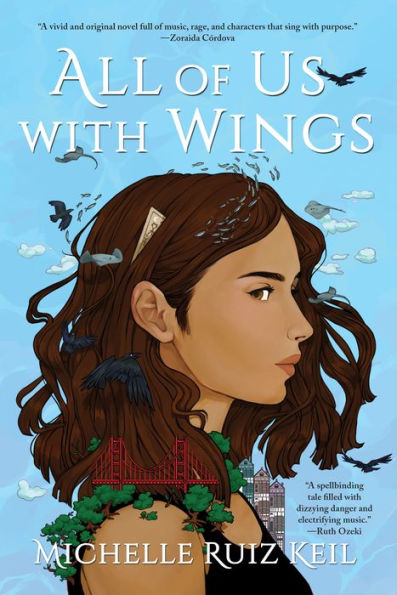 “I’m not sure what home feels like anymore. But if I could pick, this would definitely be the place,” Xochi. —All of Us with Wings

All of Us with Wings

After running away to San Francisco, 17-year-old Xochi stumbles into a new job working for an eclectic group of people that live in Eris Gardens. Eris Gardens is a mansion inhabited by the rock band Lady Frieda and their various friends and lovers. The band members live like a big family. They operate under a creed of free love and polyamory while trying to keep their party lives under control enough to protect twelve-year-old Pallas. Xochi befriends Pallas and moves into Eris Gardens to become her governess.

The story is told mostly through Xochi’s third-person perspective, but many chapters are told through the perspectives of other characters. Some chapters show the perspectives of the precocious Pallas, other eccentric characters in Eris Gardens, figures from Xochi’s past, and even the intelligent neighborhood cat, Peasblossom. The rotating perspectives help round out the story and supply viewpoints that Xochi’s perspective alone couldn’t provide. However, readers may be confused, as the narrative gives little warning before introducing the viewpoints of brand-new characters.

Xochi and Pallas make a pretend potion in the bathtub, which has unintended magical consequences. Two small supernatural beings—dubbed “Waterbabies”—appear.  The mystical “Waterbabies” begin to meddle in Xochi’s life, attacking those who wish her harm and seeking revenge on those who have harmed her in the past. In order to stop them from going out of control, Xochi must face her past and make peace with the life and trauma she left behind.  Meanwhile, she begins a perilous and forbidden romance with Pallas’ 28-year-old father Leviticus. Through its rotating perspectives, All of Us with Wings tells the story of the difficult transition to adulthood for young people who have been abused and forced to grow up too quickly.

Like many seventeen-year-olds, Xochi is not quite sure what she wants, and spends much of the book aimlessly stumbling across San Francisco as she tries to grope with her past. Readers will enjoy the story’s unique magical realism. Characters receive prophetic visions and dreams, read tarot cards, and talk about their inner eyes and auras. In this book, San Francisco oozes magic from every alley, mysterious bookshop, public mural, and street corner.  The book portrays the excitement and mystique of San Francisco’s nightlife and counter-culture, but it also delves into the city’s dark side. Some scenes take place in bars, burlesque clubs, and even a heroin den.

Xochi’s difficult past centers around her mother, Gina, who abandoned her, and her mother’s boyfriend, Evan, who sexually abused her. The Waterbabies exact their revenge on these people psychologically—by replaying the memories of the harm they have done—and physically. Despite the fact that the Waterbabies have taken Xochi’s past into their own hands, it’s still up to her to come to terms with all that has happened to her.

One of the most puzzling pieces of this book is Xochi’s relationship with Leviticus, her 28-year-old employer. Both she and Leviticus know that their relationship is taboo. Leviticus has “a strict policy” about young women, “because the older person has more experience and more power.” Older men have taken advantage of Xochi in the past, and characters frequently make reference to her age, calling her “jailbait” even though they all seem to agree that she is “mature for her age.” However, the book ends with Leviticus and Xochi on amicable terms, and open to future romance, while skirting around the questions that readers may have about whether or not the relationship is appropriate.

All of Us with Wings is for mature readers. It includes a lot of graphic content and situations that are difficult to talk about. Readers will appreciate the portrayal of a young person growing up and entering the world, but the ending may leave them confused.

“I’m not sure what home feels like anymore. But if I could pick, this would definitely be the place,” Xochi. —All of Us with Wings