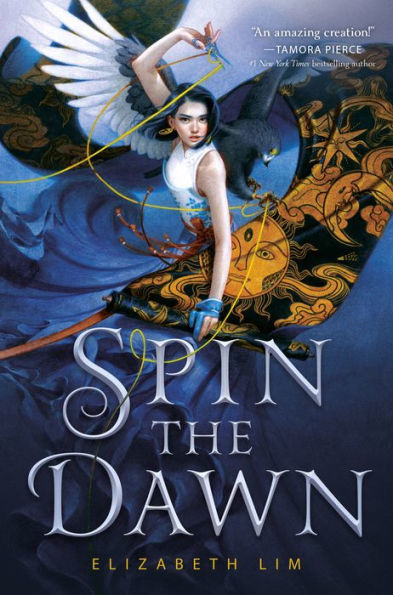 "Magic was real. Very real. And the revelation that I’d somehow used it sent me reeling with a staggering sense of wonder – and fear,” Maia. –Spin the Dawn

The Blood of Stars #1

Maia loves to sew. She dreams not only of becoming a master tailor but becoming the imperial tailor. However, it’s a far-fetched dream as only boys are allowed to become tailors in A’landi. As her father’s only daughter and youngest child, Maia is expected to be quiet, obedient, and eventually raise a family. After her older brothers die in war and her father becomes too sick to sew, the burden of caring for her family becomes even greater, and her dream of becoming a tailor fades.

Maia cannot think of anything more abhorrent than abandoning her sewing, but she sees no alternative until her father is called upon by the emperor. The emperor is getting married and needs a new imperial tailor to create his betrothed’s wedding gowns. There is to be a competition of the best tailors in the land, and her father is invited to join. Maia’s father is too sick to travel to the capital, so Maia disguises herself as her father’s son and goes in her father’s place. Soon she finds herself competing with tailors who are decades more experienced than herself, who are willing to cheat, and who would possibly even be willing to commit murder in order to become the next imperial tailor.

Spin the Dawn has a lovable, interesting cast of characters that will hook readers. The land of A’landi is foreign, beautiful, and magical. The rich characters, court intrigues, and mysterious Lord Enchanter keep the tailoring competition from becoming cliché. Readers will be delighted when magic becomes a part of Maia’s life and will understand her moral struggle in deciding whether or not to use it.

While Part I of Spin the Dawn is a delightful read focused on the tailoring competition, Part II takes an entirely different track with Maia going on a journey to create three magical dresses for the emperor’s betrothed. The lore behind the dresses is fascinating, but the journey feels rushed and some conflicts are resolved too easily to be believable. Still, the Lord Enchanter accompanies Maia on her quest and their relationship is enchanting to watch. While Part II is weaker than Part I, the delicious dynamic between Maia and the Lord Enchanter will be enough to keep readers reading until the end.

"Magic was real. Very real. And the revelation that I’d somehow used it sent me reeling with a staggering sense of wonder – and fear,” Maia. –Spin the Dawn