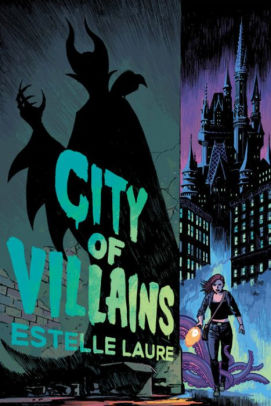 “When you’re always defending yourself from something you think is coming around the next corner, when you think the world is against you, there isn’t much of a chance for the good stuff to come through,” Tink. –City of Villains

Mary Elizabeth Heart is a high school senior by day, but by night she’s an intern at the Monarch City police department. She watches with envy from behind a desk as detectives come and go, trying to contain the city’s growing crime rate. For years, tension has simmered as the city’s wealthy elite plan to gentrify a decaying neighborhood called the Scar—which once upon a time was the epicenter of all things magical.

When the daughter of one of the city’s most powerful businessmen goes missing, Mary Elizabeth is thrilled when the Chief puts her on the case. But what begins as one missing person’s report soon multiplies, leading her down the rabbit hole of a city in turmoil. There she finds a girl with horns, a boyfriend with secrets, and what seems to be a sea monster lurking in a poisonous lake. As the mystery circles closer to home, Mary finds herself caught in a fight between those who once had magic, and those who will do anything to bring it back—even if it means creating a few monsters along the way.

This dark, fairytale-inspired world explores the reimagined origins of Maleficent, Ursula, Captain Hook, and other infamous Disney villains. Readers who expect to walk into a world of Disney characters will be disappointed to discover that while the characters are named after Disney characters, they are normal humans. To make matters worse, at the beginning of the story, a slew of characters are introduced, but most of them have only a brief appearance which leads to confusion. In addition, the characters are so underdeveloped that readers will have a hard time connecting with them. While the story is told from Mary Elizabeth’s point of view, her insight into her friends’ true personalities also adds to the confusion.

The setting of the story is unclear because it references the United States in modern day, but it also is a world that magic used to exist in. Like the characters, the world building is underdeveloped. Unlike most Disney stories, City of Villains revolves around teenagers who hang out at bars. Plus, Mary Elizabeth is an intern at the police station which gives her access to some brutal murder cases, including her own family’s murder. For example, the police are attempting to solve a gruesome case that involves a murderer leaving gift-wrapped body parts all over the city.

City of Villains will leave many Disney fans disappointed. The plot takes the reader on a winding and confusing journey through a world with little magic. The gruesome murder scenes, the underdeveloped characters, and the unrealistic conclusion make City of Villains a book that is best left on the shelf. Readers who want a fairytale-inspired story should check out Fairy Tale Reform School by Jen Calonita or the Once Upon a Con Series by Ashley Poston.

“When you’re always defending yourself from something you think is coming around the next corner, when you think the world is against you, there isn’t much of a chance for the good stuff to come through,” Tink. –City of Villains