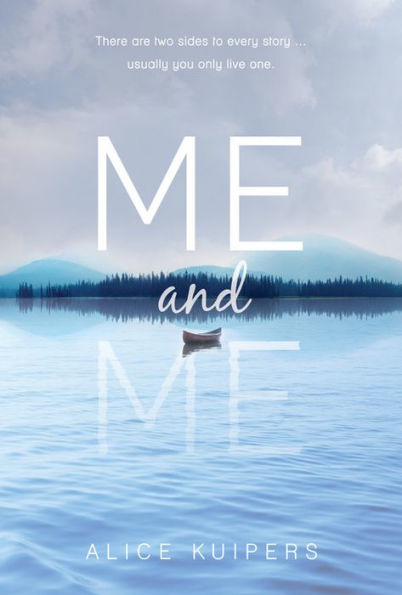 Other books by Alice Kuipers

“Listen to the quiet of your heart. Follow it. The world is more layered than it seems, and in those hidden depths, you’ll find yourself,” Lark’s mother. –ME and Me

The bright sun greeted Lark as she planned for her day. She smiled as she thought of having a perfect date with Alec. A perfect birthday. Enjoying the blue skies and calm lake water would be the perfect way for Lark and Alec to get to know each other. Then screams pierce the silence.

Annabelle, a girl Lark used to babysit, is in danger. Alec jumps in to help, but when he enters the lake, his head hits a rock. Now both Annabelle and Alec are in trouble, and Lark doesn’t know what to do. It only takes Lark seconds to react, but in those seconds everything changes. Her world is torn into two parallel lives, reflecting her two choices of who to save, and afterward, we see Lark live out the result of each choice.

The concept of living a parallel life is interesting; however, the storyline of Me and Me is confusing. Lark changes from one parallel life to the other without warning, making the transition jarring. Instead of focusing solely on Lark’s parallel lives, the author also delves into other heavy topics, including the loss of a parent, domestic abuse, shoplifting, and sexual peer pressure. The addition of so many topics adds to the confusion of the story and because so many subject matters are thrown in, none of the topics are well developed.

Lark’s world is filled with many friends but instead of adding interest, the number of minor characters piles onto the confusion. None of the friends are well developed, making it hard for readers to feel invested in the story. Even though Alec is a major character, there is little to like about him. Even though Alec talks about his abusive father, he doesn’t act to protect himself or his mother because he doesn’t want to see his father in jail. The only reason Lark seems invested in Alec is because the two have a physical attraction for each other. Right from the start, the two have hot, steamy make-out sessions that get in the way of the story’s action.

The end of the story highlights the dangers of shoplifting and how it can destroy a person’s future. Lark realizes her “tendency to take risks was out of control” so she goes to therapy. Afterward, she “felt brave for dealing with my issues.”

Unless someone is extremely interested in parallel lives, Me and Me would best be left on the shelf. The confusing story will leave readers wondering why Lark’s story was worth their time.

Other books by Alice Kuipers

“Listen to the quiet of your heart. Follow it. The world is more layered than it seems, and in those hidden depths, you’ll find yourself,” Lark’s mother. –ME and Me