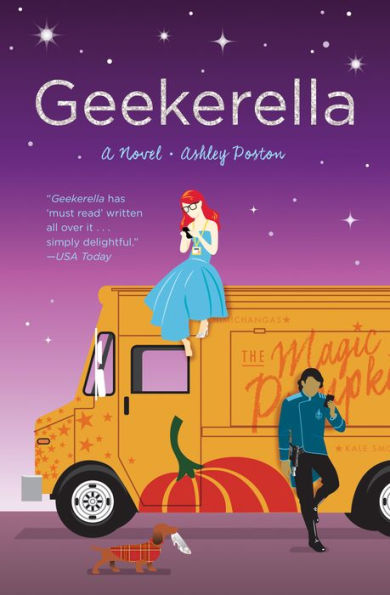 Elle Whittimer is living in an impossible universe. Her father died, leaving her with her awful stepfamily. Now her only connection to her father is through Starfield, an old science fiction television show that he loved so much he started a fan convention for it. These days ExcelsiCon is one of the biggest cons in the country, but Elle hasn’t been back since her father died. Instead, she finds her solace in late night Starfield reruns, posting on her blog, Rebelgunner, and dreaming of the day when she can escape to California and become a screenwriter. When a movie reboot of Starfield is announced, Elle is afraid that her favorite story is about to be ruined. But this movie just might be the ticket to her dreams because this year, the first-place prize for ExcelsiCon’s cosplay contest is a chance to attend the premiere in Hollywood. With a little help from her coworker Sage, Elle decides to turn her father’s old costume into a prize-winning cosplay.

Darien Freeman just landed the role of a lifetime: Federation Prince Carmindor in the Starfield movie reboot. However, as a lifelong fan, he’s afraid he won’t be able to do the character justice. There are already fans, like the blogger behind Rebelgunner, who are convinced that casting a teen heartthrob was a terrible idea. The last thing Darien wants to do is surround himself with a bunch of angry, hardcore Starfield fans, which means he really needs to get out of judging the ExcelsiCon’s annual cosplay contest. When Darien sends a text hoping to contact someone at ExcelsiCon, he ends up reaching Elle. After connecting through a mutual love of Starfield, their anonymous friendship begins to grow into something more. But what will happen when their paths cross on the convention floor?

Geekerella is part modern-day Cinderella story and part love letter to fandom culture. Poston does a wonderful job exploring the ways in which art can bring together creators and fans alike – across time and distance. Themes of love and acceptance are an integral part of the story. At the same time, some darker topics are addressed, like Elle’s mistreatment by her stepfamily and how Darien has lost his personal life to overzealous fans and toxic paparazzi.

At its heart, Geekerella is an adorable fairytale. Even if readers are unfamiliar with fandom culture, they can still have fun picking out the parallels to the classic Cinderella story. Elle is a charming heroine, whose wit and determination make her easy to root for, while Darien’s sweet optimism makes him an incredibly endearing character. When these two lonely souls find each other through a mutual love of Starfield, it’s nearly impossible not to hope that their budding romance will overcome all the obstacles thrown in their way.