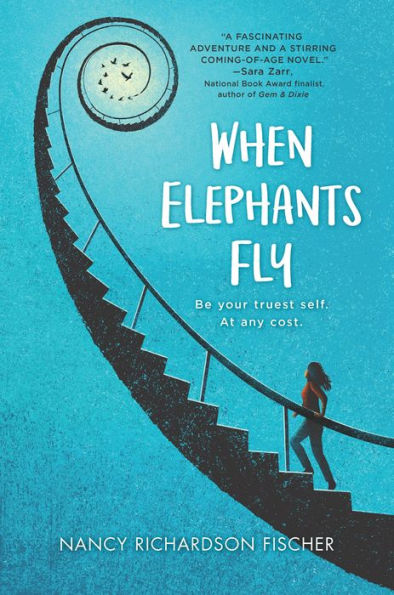 Lillian has a plan. No boys, no stress, and no drinking. In fact, Lillian’s entire life revolves around a plan that avoids any sort of stress that could trigger schizophrenia. Schizophrenia runs in Lillian’s family; it drove her mother to throw Lillian off a roof when she was just a child. While Lillian’s plan to avoid stress seems like a good idea, Lillian’s best friend Sawyer worries she is letting life pass her by.

But Lillian doesn’t mind. That is until her job at a newspaper requires her to cover the birth of a baby elephant. The baby elephant, nicknamed Swifty, is rejected by her mother shortly after the birth and is nearly trampled to death by her mom. Due to their similar plights, Lillian finds herself drawn to Swifty and filled with a need to protect the baby elephant. But will saving Swifty cost Lillian her best friend, her freedom, and her sanity?

Throughout the story, Lillian struggles between taking the easy route to preserve her sanity and risking everything to save Swifty. The bond between Lillian and Swifty allows the reader to become emotionally concerned about Swifty and care about her well-being. The end of the novel suggests that it’s okay and even right for Lillian to risk her health and break the law in order to protect Swifty, despite the fact that she goes against the advice of adults with much more elephant experience than her. In the end, Lillian perseveres due to her unconditional love for Swifty.

When Elephants Fly has a delightfully original plot. It’s filled with facts about both elephants and schizophrenia that are conveyed to the reader in a way that meshes well with the storyline and doesn’t come across as obtrusive. The characters are unique but shallow. The original premise of the story will keep readers turning the pages. The lack of descriptions in When Elephants Fly may disappoint older readers; however, for readers just graduating to the YA level, this story is sure to delight with its many twists and turns.

The story touches on some difficult topics, including mental illness, genetics, family trauma, friendship, and animal rights. Although the author attempts to educate readers about schizophrenia, she unfortunately allows readers to believe that mental illnesses can be prevented–which is not the case. Flashbacks are scattered throughout the story, allowing readers to get a glimpse into Lillian’s thinking process as well as her increasingly unsteady mental health. Although When Elephants Fly has an interesting premise, readers will notice that some of the plot points are unrealistic, the romance is forced, and the characters are underdeveloped. Despite the book’s flaws, anyone interested in mental health or animal abuse should read When Elephants Fly.