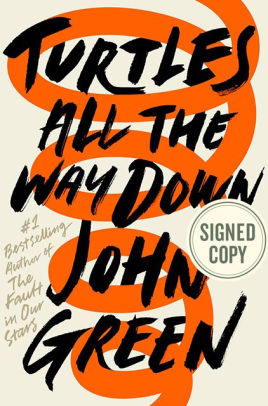 “True terror isn’t being scared; it’s not having a choice on the matter,” Aza.  —Turtles All the Way Down

Turtles All the Way Down

Aza and Davis haven’t spoken in years. Their childhood bond fizzled as the distance of adolescence separated their lives. Then Davis’s father, multi-billionaire Russell Pickett, goes missing the night before the police raid his house. Aza doesn’t plan to pursue the mystery of Russell Pickett’s whereabouts.  But there is a one-hundred-thousand-dollar reward, and, as Aza’s best friend Daisy likes to point out, shouldn’t they take advantage of a childhood friendship?

Meanwhile, Aza is grappling with an ever-tightening mental spiral of her own thoughts. Every day she must fight to regain control and stop her fears from consuming her. This story of first love, mystery, and mental health blends effortlessly to create one of John Green’s finest works to date.

Many sensitive topics are discussed and analyzed in this novel, making it a teen must-read. Aza’s difficulties coping with depression and OCD are beautifully articulated, giving the reader a greater understanding of these issues. Aza battles mental health challenges while navigating the complications of everyday life, making this a relatable story for readers who may feel overwhelmed by the weight that life can carry.

However, this story is not for the faint of heart. Younger readers may be disturbed by the sensitive issues the story explores, including the loss of a parent, intense mental health issues, burgeoning teen sexuality, and abandonment. There is also a fair amount of unnecessary profanity that may not be appropriate for younger readers.

The importance of parental figures in the novel highlights an aspect of teen life that is often overlooked in young adult fiction. The parents are presented in the wake of traumatic events as multi-dimensional characters, a contrast to how they are often depicted in other young adult novels.

Fans of John Green’s previous works will not be disappointed as Turtles All the Way Down carries his familiar style and packs the emotional punch that readers have grown to expect from his work. Although the story drags in places, Turtles All the Way Down will delight, inspire, and captivate readers through the masterful use of words, emotions, and thorough development of characters.

“True terror isn’t being scared; it’s not having a choice on the matter,” Aza.  —Turtles All the Way Down