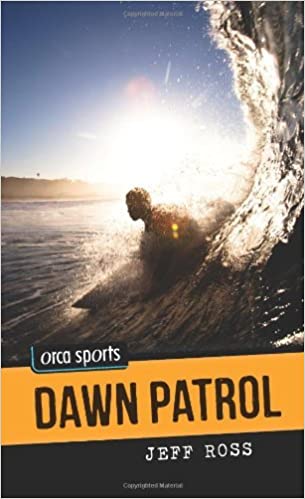 Luca and Esme have more than monster waves to worry about.

When Kevin disappears, leaving only a cryptic note, his best friends Luca and Esme have no choice but to try and find him. Their journey takes them to the coast of Panama, where they confront monster waves, unfriendly locals and a surfer who seems bent on destroying them. As their hope dwindles and time runs out, Luca and Esme realize they may be in over their heads.

Because of the short length of the book, none of the characters are well-developed. However, the fast-paced mystery will still capture readers’ interest. The main plot focuses on Luca and Esme’s search for their missing friend. As the two friends search for clues, they meet Jose, whose strange behavior puts Luca and Esme on high alert. Between surfing monster waves, looking for clues, and trying to track down Jose, Dawn Patrol keeps the action and mystery high.

The story is told from Luca’s point of view. Readers will connect with Luca because he is an admirable character who is willing to go to great lengths to find his friend. The conclusion ends on a hopeful note but doesn’t wrap up all the story threads. Despite this, Dawn Patrol is a quick and easy read that will engage readers. As part of the Orca Sports collection, Dawn Patrol is perfect for reluctant readers because it uses a high-interest topic that will entertain teens and help them improve their reading skills.