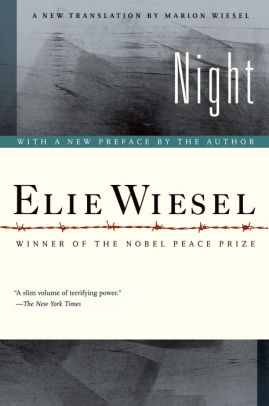 “You are in Auschwitz. And Auschwitz is not a convalescent home. It is a concentration camp. Here, you must work. If you don’t you will go straight to the chimney,” SS officer. –Night

Although news of World War II reaches Elie and his family, they feel safe. They believe the Germans will never make it to their hometown of Sighet, Transylvania. But soon, the SS are in their town, but no one believes the horror stories of torture and death. And then, Elie and his family are taken from their home.

Night is Elie’s personal story, beginning at age 12. Elie, who was a deeply observant Jew, must confront the evil he witnesses while in the Auschwitz and Buchenwald concentration camps. He recalls the terrifying memories of the death of his family, the death of his own innocence, and the death of his beliefs. Elie wants others to understand that the cruelty of the camps and the death of innocents must never happen again.

Night uses powerful imagery that will stay with the reader for years. Unlike the Diary of Anne Frank, Night shows the horrors that took place during World War II. Elie often recalls people’s deaths, and he does not shy away from gruesome descriptions. Even though Elie describes the murder of many people including children, the descriptions are not bloody and do not glorify the events. As Elie describes the events that he experienced, he shows how the SS soldiers as well as ordinary people were cruel.

The real-life testimony in Night gives readers insight into the minds of the Jewish people and to the suffering of those who went to the concentration camp. Although the events are not easy to read about, Night is a must-read because everyone should understand how anti-Semitism played a part in the murder of over six million people. Through Elie’s journey, he chronicles his changing relationship with his God and with his father. He describes how the concentration made people act like animals, who were willing to kill for a crust of bread. The desperation and hopelessness of those in the concentration camp is difficult to read about, however, it sheds light on the conditions of the camps. Elie’s story will help readers understand the importance of standing up for those in need and hopefully prevent another Holocaust from taking place.

“You are in Auschwitz. And Auschwitz is not a convalescent home. It is a concentration camp. Here, you must work. If you don’t you will go straight to the chimney,” SS officer. –Night