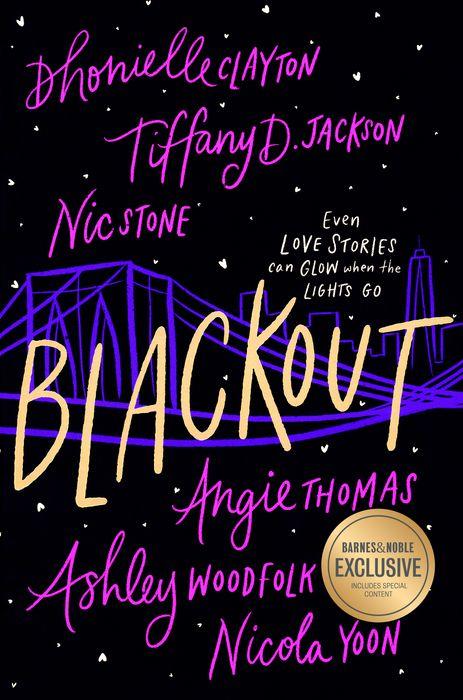 “That’s the thing about finding the right person to love. When someone loves you, all their hang-ups don’t really mean much. Because loving that person is a choice you have to make every day, even when that day isn’t what you expect,” Tammi Wright. — Blackout

The sun beats down on the city of New York where there are places to go and people to see. As a heatwave takes over New York City, electricity goes out. This creates the infamous blackouts causing the lights to go off and the trains to stop running. No electricity also means no air conditioners, and that everyone outside is sweating through their clothes from the summer heat and humidity. Amid the blackout, six couples spark a different kind of electricity in the City that Never Sleeps as old loves, and new ones, meet and head to a massive block party in Brooklyn.

Blackout features six short stories following six couples. “The Long Walk” follows two exes named Tammi and Kareem. Kareem needs to get to a block party and Tammi needs to go back home to Brooklyn – coincidentally where the block party is being held. Together, Tammi and Kareem begin a long walk to Brooklyn during the heatwave. “The Long Walk” is also split into 6 parts and scattered throughout the novel instead of being compacted like the rest of the short stories.

“Mask Off” is a queer, MLM (Man Loving Man) love story that follows Tremaine and basketball star JJ. The two of them are riding on the subway before it is shut down by the blackout. “Made to Fit” is another queer, WLW (Woman Loving Woman) love story that follows Nella and Joss at a senior living facility. Nella’s grandfather accidentally loses a picture of his wife, Nella’s grandmother, and Joss offers to help Nella look for it in the dark.

“All the Great Love Stories…and Dust” features two characters named Lana and Tristan, who are trapped in the New York Public Library during the blackout and play a game to see who can find the best book. “No Sleep Till Brooklyn” follows a love triangle on a double decker bus between Kayla, Micah, and Kayla’s boyfriend Tre’Shawn. The final story, “Seymour and Grace,” is a first meeting between Grace and her Ryde driver Seymour. Grace needs to get to the block party in Brooklyn, but the trip gets interrupted by Seymour’s car running out of gas.

All six short stories follow a prose narrative style in the first-person perspective of their respective narrators. Each writer has a different writing style and format. For example, “All the Great Love Stories…and Dust” features footnotes at the bottom of the page to convey Lana’s truth and demonstrate her character. “The truth: I [Lana] just wanted us to have our adventures together away from anyone we might run into. The people we are in Brooklyn aren’t the same people we are in Manhattan or the Bronx or Queens. Do you think you can be a totally different person in a different place? Your insides and outsides transforming into another you?”

There is a sense of consistency between all six authors, allowing the reader to easily grasp the flow of the stories and connect them to the other five. The stories feature romance, and the novel is meant to celebrate young black love. All the characters are teenagers, and most of them are in their late teens. This makes them relatable to a young adult audience as the characters deal with friendships, their identity, and college. For black young adult readers, Blackout provides them the representation they need, and the novel perfectly portrays each character in their own, individual light with their own individual stories and identity.

Blackout is a beautiful novel written by six black authors who bring to life the idea of young love. Each story celebrates young black love and the diversity that occurs in the black community. Queer black teenagers get their own love stories separate from their straight counterparts. Each story provides a small twist on the romance genre due to the authors’ distinct writing style and the story’s format. This book is for readers who are a fan of romance and for Blackout’s targeted audience of black readers. The book is extremely entertaining and will have fans wanting more.

“That’s the thing about finding the right person to love. When someone loves you, all their hang-ups don’t really mean much. Because loving that person is a choice you have to make every day, even when that day isn’t what you expect,” Tammi Wright. — Blackout