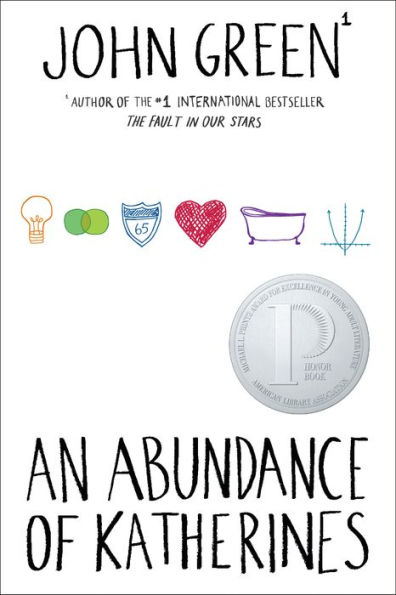 “I wanna have a Eureka moment,” Colin Singleton. –An Abundance of Katherines

An Abundance of Katherines

Just hours after graduating from high school, Katherine XIX dumps Colin Singleton. Colin grew up as a child prodigy, who does not get along well with others. And he only falls for women named Katherine. He understands that his role in the universe was to fall in love with Katherines and then to inevitably be dumped by them.

Following the break-up, Colin’s only friend, Hassan, takes Colin on a road trip. They end up in Gunshot, Tennessee where they meet Lindsey. Lindsey’s mother offers Colin and Hassan a summer job collecting an oral history of the small town. The two boys interview people about their experiences in Gunshot. At the same time, Colin works on creating a mathematical theorem to graph, describe, and predict relationships.

An Abundance of Katherines follows Colin as he grapples with finding his purpose in the world. Colin struggles with being an incredibly gifted child prodigy but feeling as though he is failing to live up to his expected potential. Colin states, “Prodigies can very quickly learn what other people have already figured out; geniuses discover that which no one has ever previously discovered. Prodigies learn; geniuses do.” Colin also struggles with the expectations his parents have for him, as his father always pressures him to not only be a prodigy but also to grow into a genius. This causes Colin to frequently have anxiety when he fails to meet these unrealistic goals. But Colin is still determined to make his mark on the world and be remembered.

Colin, Hassan, and Lindsey are likable characters who provide many perspectives. Although the book is only told from Colin’s perspective, Hassan and Lindsey’s experiences are thoroughly described as they spend every day with Colin. Colin provides meaningful insights into a gifted child struggling with failure and navigating the process of growing up. Readers will be able to relate to Hassan who struggles with discrimination and finding motivation in life’s endeavors. In addition, Lindsey’s perspective helps readers understand the struggle to identify their true self.

This upbeat novel takes the reader on a journey of self-discovery and maturing into adulthood. An Abundance of Katherines will resonate with readers of different ages because of the relatable conflicts. As teenagers transition into adulthood, they might grapple with understanding their place in the world. Colin’s journey provides readers the opportunity to feel less alone in these struggles, while also providing an entertaining, hilarious story. Ultimately, Colin finally has his Eureka moment by discovering, “You matter as much as the things that matter to you do.”

“I wanna have a Eureka moment,” Colin Singleton. –An Abundance of Katherines