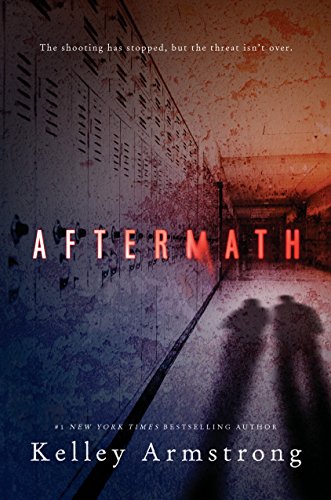 “I used to have nightmares where Luka wasn’t involved in the shooting. Where they investigate again and discover it was all a mistake. Those were wonderful dreams… until I woke up and remembered that wasn’t how it happened, and the recollection would twist them into a nightmare,” Skye. —Aftermath

Three years ago, Skye’s older brother Luka was implicated as one of three perpetrators in a school shooting that claimed the lives of four victims. Though Luka never fired a weapon, the police saw him walk out of the bathroom holding a gun, and when he didn’t drop it, they shot him dead. The evidence that he was a willing participant could not be more damning than that, though Skye cannot fathom how her “kind and thoughtful brother . . . joined his friends in a school shooting.” In the wake of endless harassment and her father walking out on the family, Skye and her mother moved away to live with her grandmother.

However, a turn of events forces Skye to move in with her aunt back in the town she grew up in. She knows that while much of the country has forgotten the shooting, “the people here will have not forgotten. They will not have forgiven.” She finds herself going to school surrounded by peers who were personally impacted by the shooting. One of these peers is her former best friend, Jesse, who lost his older brother that fateful day. Skye had anticipated the isolation, dirty looks, and cruel comments. However, strange events start occurring and it seems Skye is being given cryptic clues that there is more to the story of the tragedy. Skye and Jesse end up reconnecting and teaming up to uncover the truth. Could Luka have been innocent? More urgently, could the true third perpetrator still be out there, planning another attack?

Aftermath is largely told from Skye’s perspective. She is a well fleshed out narrator and the reader is able to sympathize with the shame and defeat she feels as the sister of a school shooter. She struggles with misplaced guilt over the lives lost due to her brother. It’s heartbreaking to see her suppressed grief over losing Luka. As she puts it, “You aren’t allowed to grieve for someone like Luka. It doesn’t matter if he was an amazing brother.” However, the book falters in the chapters that are told from Jesse’s perspective, which are in third person. The perspectives do not alternate evenly and Jesse’s point of view is shared less frequently. Moreover, the reader might feel a disconnect with his character due to the different perspectives. Unfortunately, Jesse’s narrations end up feeling unnecessary and they disrupt the narrative’s flow.

Though Skye is a well-rounded protagonist, there are areas of her character that will leave the reader wanting. For instance, her relationship with her deceased brother is not adequately explored. The novel states that they were close, and offers a couple memories, but not enough depth for readers to understand their strong bond. In addition, Skye’s romance with Jesse falls quite flat. Since the two friends were developing an attraction to each other before the shooting, it’s rather predictable that the flame will be rekindled once they cross paths again, but their romance ends up feeling like an unnecessary addition to the story.

Aftermath is well written and easy to follow; plus, it has interesting twists and turns. Though some of the events that take place admittedly stretch the suspension of disbelief, young readers will likely be too wrapped up in the story to care. As the sister of an apparent school shooter, Skye’s perspective is intriguing and not one commonly found in stories that handle this type of subject matter. Unfortunately, the book loses some of this uniqueness when Luka is revealed as having been innocent, even heroic. As such, Skye is given an easy out from her shame and her struggle to balance mourning her brother while also accepting that he took part in the tragedy.

Even though Aftermath is a well-told story that manages to stand out among other YA novels that handle shootings, it is undeniably flawed. Despite this, Aftermath is definitely worth reading for those interested in crime fiction, especially if they are interested in viewing crime from a unique perspective. However, readers might end up being let down by the conclusion’s reveal, which feels like a bit of a cop-out. Readers who want to explore the grief associated with school shootings may also want to read Every Moment After by Joseph Moldover and Shooter by Caroline Pignat.

“I used to have nightmares where Luka wasn’t involved in the shooting. Where they investigate again and discover it was all a mistake. Those were wonderful dreams… until I woke up and remembered that wasn’t how it happened, and the recollection would twist them into a nightmare,” Skye. —Aftermath