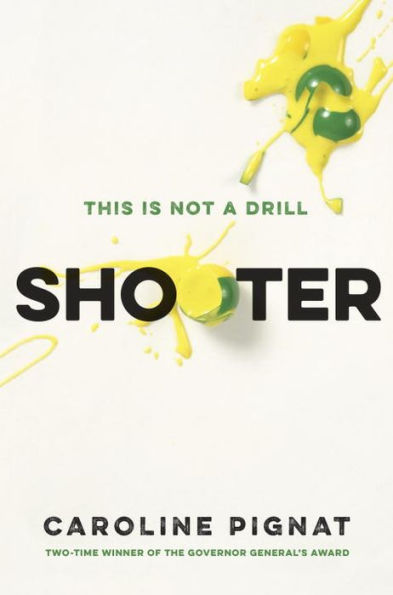 “But I seem to do it all the time with people. I read a little bit of their lives and think I know them. Or worse yet, judge them entirely by the cover. We all do it, I guess. We buy into whatever story makes us feel better about our own,” Alice. –Shooter

Following the lives of five high school students that were trapped in a horrific high school shooting, Shooter is called the modern-day Breakfast Club. Alice is a shy, introverted writer who spends a lot of time worrying about her autistic big brother, Noah. Isabelle is the perfect egomaniac princess who seems to run the school and have a perfect life. Hogan is the giant, scary ex-football player who gave up on life after his brother’s death. Xander is the awkward student photographer who has a hard time understanding other people. These five students would never, ever be friends with each other.

But when a lockdown drill starts, they are forced to hide in a bathroom, where they realize their pasts are all intertwined in some way. Locked in a room with no way out, they gain an understanding of one another and start to care for each other. However, everything is thrown for a twist when Isabelle receives a text that the lockdown is not a drill—there is a live shooter on campus. When things cannot seem to get worse, they discover the shooter has planted a bomb on campus and plans to blow up the whole student body. They have to stop him before time runs out!

Shooter is about who the main characters really are versus how others perceive them. Isabelle seems to be a perfect princess, but after her trip to the Dominican Republic she hates how materialistic her life has become. Alice may appear like a successful writer with a great future ahead of her, but she worries about leaving her brother when she goes to college. Hogan might seem hateful and violent but deep down he still has not gotten over his brother’s death. Xander does not mean to be awkward, mean, or insensitive, and in actuality is very kind and thoughtful. The author even develops the character of Maxwell, the school shooter, by giving him a backstory and personality—rather than just leaving him as an undeveloped, evil villain. With this, Pignat teaches readers that everyone has a past that has shaped who they are and that we should get to know people before we start to judge them.

Pignat’s use of prose, poetry, text messages, journals, and homework assignments perfectly show the characters’ different points of view. Readers will find they have a lot in common with the characters as they watch them struggle to overcome their problems. However, the book is about a school shooting, a touchy subject in today’s times, and is not an easy read because of the amount of violence in the novel. However, with the engaging characters, it is a good read and may help readers better understand self-identity and social problems. Readers who enjoyed Shooter may also want to read This Is Where It Ends by Marieke Nijkamp.

“But I seem to do it all the time with people. I read a little bit of their lives and think I know them. Or worse yet, judge them entirely by the cover. We all do it, I guess. We buy into whatever story makes us feel better about our own,” Alice. –Shooter