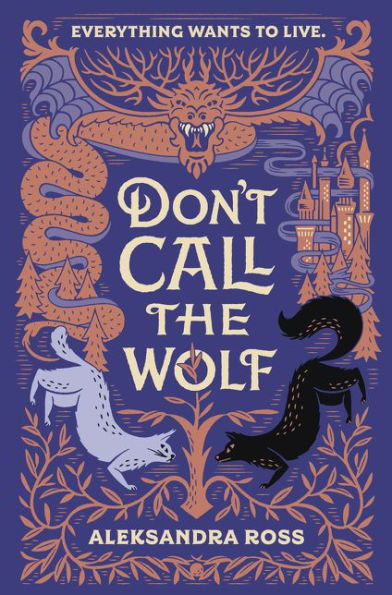 “I was just a baby. I was the weakest, most defenseless creature in that forest, and I still became its queen,” Ren. —Don’t Call the Wolf

Lukasz has lived the life of a nomad ever since he and his nine older brothers were forced from their mountain homes. As the last of the famous Wolf-Lords, a group of dragon slayers, they’ve roamed the country hunting dragons, falling in love and being put on display as a distinct race. But one by one, Lukasz’s brothers are called back to their mountain home to slay the beast that forced them out in the first place: the Golden Dragon. Now, two decades later, Lukasz finds himself following the same path, searching for his brother, Franciszek. But when Lukasz starts his journey he encounters a girl that will change everything for him.

That girl is Ren, the queen of the forest. Ren is a shapeshifter, who is able to change into a lynx whenever she needs to. Since monsters have begun to spread throughout the woods, Ren has offered safe haven to all the animals of the forest. Though young, she’s determined to protect her home, no matter what it takes. But, when the Golden Dragon shows up to burn her forest, Ren realizes she can’t fight alone anymore. When she meets Lukasz, she strikes a deal with him: slay the Golden Dragon and she’ll help find Franciszek.

However, that may not be as simple as it sounds. Unlike his brothers, Lukasz has no desire to slay the Golden Dragon. He just wants to find Franciszek and leave. Even if Ren and Lukasz have begun to fall in love with each other, he may very well break her heart in the end.

Don’t Call the Wolf is a standalone novel that’s well-written and well thought out. It’s a story about two worlds, the human world, and the fairy tale world, colliding unexpectedly. Lukasz is a Wolf-Lord, a dragon slayer, both an ally and enemy to Ren and her animal family. Throughout the novel, the disparity between humans and the rest of the natural and magical world is constantly shown, especially the distrust between the two groups. Through this, the novel explores how people can be too quick to judge or be wary of anything different or unfamiliar.

The story’s message of prejudice is where the novel is the strongest, as it weaves together characters that come from a variety of backgrounds and that overcome those prejudices to not only continue their journey but to become friends. A few even go so far as to sacrifice themselves for others. These characters, while not as fleshed out as they could be, are endearing because of this. The main characters, Ren and Lukasz, are the strongest of the cast; each character has flaws as well as realistic fears and desires. For instance, Lukasz can’t read, but this is an endearing flaw that he tries to overcome. Ren deals with being called a monster by the humans that live in her forest, and she must fight against that label.

Don’t Call the Wolf is a retelling of the Polish fairy tale The Glass Mountain. The story is full of adventures in the magical forest, and romance that is excellently paced. The character development is similarly strong, and Ren is fabulously fierce. Don’t Call the Wolf is a great read for anyone looking for a touch of magic in a novel. With a strong setting, elements of a fairy tale, and a theme of overcoming prejudice, fantasy lovers will want to pick up this novel.

“I was just a baby. I was the weakest, most defenseless creature in that forest, and I still became its queen,” Ren. —Don’t Call the Wolf