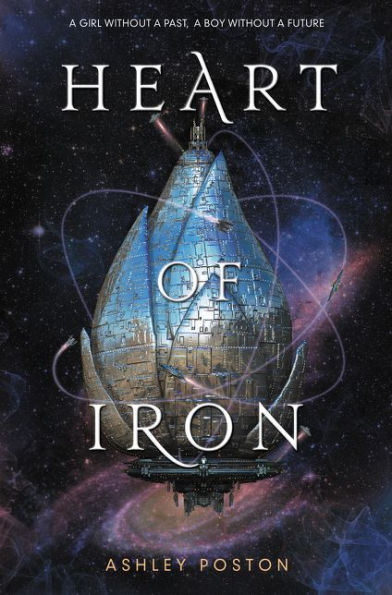 "You are worth more than the sum of your parts D09, and I’m going to save you.” Ana. -Heart of Iron

Twenty years ago, when a deadly plague was sweeping its way through the Iron Kingdom, salvation came in the form of androids, known as Metals, created by Lord Rasovant to care for the sick without risk of infection. Seven years ago, the once benevolent Metals turned against the kingdom, attacking the royal family as they slept in the North Tower of the palace. Ever since, Metals have been something to be feared and controlled.

But seventeen-year-old Ana isn’t afraid of most things. As the adopted daughter of notorious outlaw, Captain Siege, she’s been raised to be a fighter. In fact, her best friend, D09 or Di for short, is one of the few remaining Metals in the Iron Kingdom. But Di’s memory core is glitching, and Ana believes the key to saving him lies on the Tsarina, a legendary spaceship lost to time that once belonged to the creator of the Metals. Ana would do nearly anything to save Di, including kidnap a member of the Ironblood nobility.

Robb Valerio has never believed that his father burned in the North Tower alongside the royal family. He believes that his father escaped on board the Tsarina, and he’s finally managed to secure coordinates that seem to point towards the lost ship. When Ana, Di, and their annoyingly handsome Solani friend Jax, kidnap him, Robb finds himself having to cooperate with criminals to get the information he’s desperately seeking. But the Tsarina holds more secrets than any of them anticipated, and as the past comes back to haunt them, it appears that Di and Ana might be the key to discovering what really happened in the North Tower all those years ago.

Ashley Poston’s Heart of Iron is an exciting Space Opera-esque story, loosely inspired by Fox Animation Studios’ Anastasia. It’s sci-fi geared more toward fairy tale fans than the truly scientifically minded. Poston takes classic fairy tale tropes—a lost princess, star-crossed lovers, an ancient evil threatening the kingdom—and mixes them with thrilling sci-fi elements like spaceships and androids. The resulting world-building isn’t the most unique, but it works as a backdrop for several plot twists and turns. The story relies heavily on the characters and their relationships, adding a layer of complexity to an otherwise standard plot.

Heart of Iron doesn’t focus on just one point of view. Instead, all four characters tell their own version of the story, which makes each of them compelling and intriguing in their own way. Stubborn fighter, Ana, will go to any lengths to save the people she loves but finds herself questioning everything when she learns the truth about her past. Charming Robb, who grew up fighting for his own interests among ruthless royalty, finds unexpected friendship among outlaws. Jax, a Solani with the ability to see into the future, struggles to come to terms with the idea of destiny. And then there’s Di, an Android grappling with what it means to love and be human. As their world is changing quickly around them, they must work together to survive.

Readers who are familiar with Poston’s previous work might expect Heart of Iron to have more in common with Starfield, the fictional space-opera TV show from the Once Upon a Con series, than the geek-tinged contemporary stories she’s primarily known for. Heart of Iron may be set in a sci-fi world filled with space-ship battles and evil androids, but the characters have all of the heart and humor one may come to expect from an Ashley Poston book. The ever-changing complexity of the relationships is what makes the book really shine.  At its heart it’s a story about learning how to love and be loved.

"You are worth more than the sum of your parts D09, and I’m going to save you.” Ana. -Heart of Iron