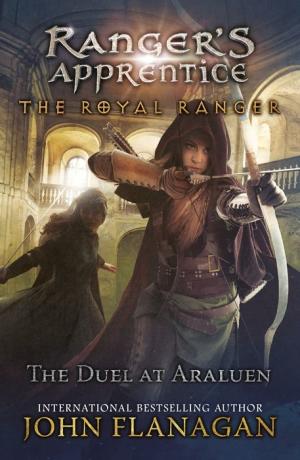 “There are no debts between friends,” Hal. –Duel at Araluen

The Duel at Araluen

King Duncan and Princess Cassandra are trapped in the south tower of Castle Araluen and under near-constant attack from the Red Fox Clan. Sir Horace and Ranger Commandant Gilan are holed up in an old hill fort, surrounded by the enemy. And Ranger’s apprentice, Maddie, is the only one who can save them all.

With the help of Hal, Thorn, and the rest of the Heron brotherband, Maddie will have to break her father and his men out of the hill fort, but will they reach Castle Araluen in time?

As the third installment of the Royal Ranger Series, Duel at Araluen continues the story of the Red Fox Clan who plan to kill King Duncan, Princess Cassandra, and Maddie. Unlike the previous two books in the series, Duel at Araluen describes many skirmishes between the rebels and the Araluens. While the book has less adventure, there is non-stop action as three groups—the Scandians, Horace and his soldiers, and Cassandra and her loyal army—prepare to defeat the Red Fox Clan.

While the book revolves around war, there is never senseless killing. Even though the Red Fox Clan planned to kill Horace and his men, when the rebels are defeated, Horace doesn’t execute the traitors. Instead, Horace orders his men to “leave the tents there for them so they won’t die of exposure. . . We’ll leave them what medical supplies and bandages we can spare and they can take care of one another.” Like the previous books, many people die, but all of the killings are in self-defense.

Duel at Araluen highlights the importance of loyalty, friendship, and bravery. For example, Jesper, one of the Scandians, makes several mean comments to one of his shipmates. Afterwards, Jesper claimed he was just joking. Hal scolds Jasper, saying, “A joke is when everyone can have a good laugh together. But when you do something that’s spiteful and hurtful and causes misery to someone else, that’s not a joke. That’s cruelty.”

Duel at Araluen uses the same format of all The Ranger’s Apprentice books. Even though the format is familiar, readers will be happy to see returning characters such as the Scandians from the Brotherband Series. Seeing the world from Maddie’s point of view gives the setting a fresh outlook. Plus, both Cassandra and Maddie have strong roles that involve leadership, planning, and fighting. Instead of being portrayed as stereotypical damsels in distress, Cassandra and Maddie are well-developed, capable characters who have many admirable traits. Readers who want to explore books with a strong female character and plenty of action should also add the League of Archers Series by Eva Howard to their reading list.

“There are no debts between friends,” Hal. –Duel at Araluen