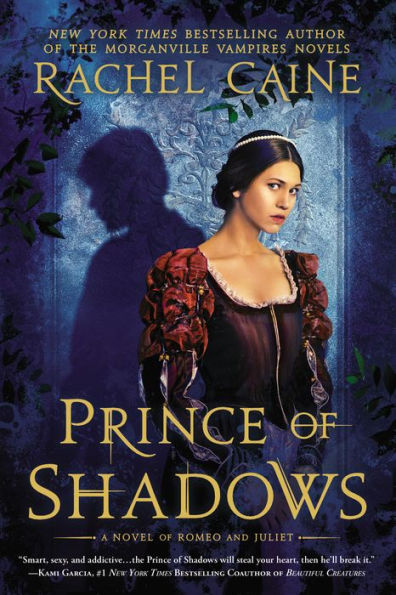 Prince of Shadows puts a fresh twist on the story of Romeo and Juliet. Instead of focusing on the two original star-crossed lovers, Prince of Shadows focuses on Benvolio and Rosaline. Many of the scenes follow the play Romeo and Juliet. In several scenes, the words of the characters also come from the play; however, the author put the words into a new context which adds interest to the story.

Benvolio is trying to keep Romeo from an irrational and dangerous love for Rosaline. However, in doing so Benvolio finds that he is drawn to Rosaline, the beautiful niece of Lord Capulet. This complicates Benvolio’s life in several ways. Now Benvolio must not only concern himself with keeping Romeo safe from the Capulets, but he must also make sure that Rosaline does not come to any harm because of Romeo’s infatuation.

Romeo’s problems are only part of Benvolio’s difficulties. He must also deal with a demanding sister, a conniving grandmother, and hiding the fact that he is a thief. When night falls, the reader often sees Benvolio sneak into other people’s houses to exact revenge by stealing their possessions.

This book also explores Mercutio in more detail. Mercutio is full of fire, wit, and love. Yet Mercutio’s love is dangerous because he happens to be in love with another man. Although Benvolio and Romeo know of Mercutio’s “sinful” love, they are loyal to their friend.

Sword fighting, thievery and intrigue are abundant in Prince of Shadows. The fighting scenes add danger, but they also include descriptions of bloody wounds, as well as death. The fighting between the Capulets and Montagues happens often and is a major plot component of the story, and in another scene a character is hung because he is homosexual. These scenes are described in detail, so this book may not be appropriate for squeamish readers.

The story also contains a lot of sexual content. It explores the topic of marriage during the time period, as well as the prevailing beliefs of homosexuality. Because of the sexual content and the violence, Prince of Shadows should only be read by the mature reader. Although the storyline is intriguing and the book is fast-paced and entertaining, the subject matter is not suitable for the younger reader.