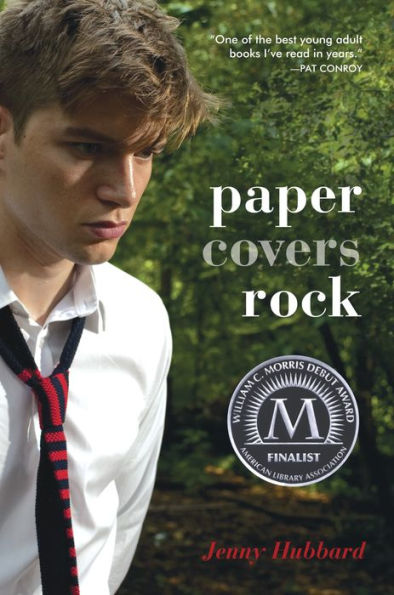 Alex narrates his story through diary entries and poetry. At the beginning of the school year, Alex and his friends are drinking and decide to jump off a tall rock into the river. Thomas, one of Alex’s best friends, dies. With that death comes terror—the terror of someone finding out that they were illegally drinking. The terror that Mrs. Dovecott saw more than she is letting on. The terror that Thomas’s last words will shatter someone’s life.

Alex life is full of secrets. He splits his time between daydreaming about his crush on Mrs. Dovecott and wondering how far Glenn will go to keep their secret. Paper Covers Rock revolves around Thomas’ death and the boys wanting to keep their drinking a secret. Glenn wants Alex to tempt Mrs. Dovecott into kissing him so that she will get fired. And Alex reluctantly goes along with the plan.

The storyline of Paper Covers Rocks does not always ring true. The boys’ lives are full of lies, deception, and sexual content. As Alex paints the story of his life, it is hard to connect with someone who is willing to lie to everyone around him in order to hide the fact that he was drinking when his friend died.