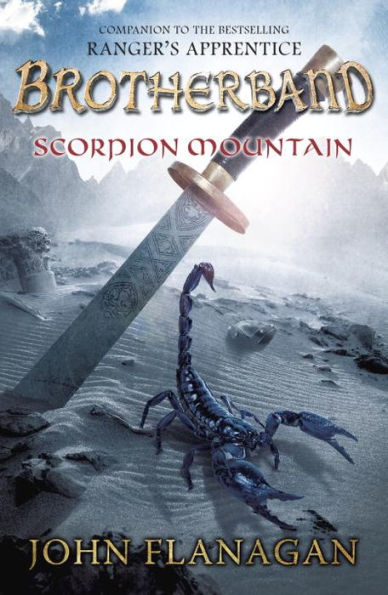 Even kings need “people disagreeing with them. We get accustomed to thinking we’re always right just because we are kings,” King Duncan. –Scorpion Mountain

Hal, his Brotherband crew, and the Ranger Gilan have freed the twelve Araluens sold into slavery. Returning to Araluen, Gilan is given a new mission by King Duncan: protect his daughter’s life. Princess Cassandra has survived one attempt on her life already, and now whispers of a second attempt have reached the kingdom. A deadly sect known as the Scorpion Cult is thought to be behind the assassination threat. Not waiting to see if the knife will strike true, the Brotherband again teams up with Gilan to track down the would-be killers.

Like the other books in the Brotherband series, Scorpion Mountain has nonstop action as Hal and the other Herons travel to a new location. Several characters from the Ranger’s Apprentice Series make an appearance and assist the Herons. The Herons fight in several bloody battles, which are described in more gruesome detail than in the previous books. One member of the brotherband, Ulf, is seriously injured and must be left behind. However, Ulf eventually heals from his wounds and is reunited with the Herons. While much of Ulf and his brother’s bickering was entertaining, many readers will find that they do not miss the brothers’ constant arguing.

As the fifth installment of the series, Scorpion Mountain continues to show the different qualities of the Brotherband Series, however, none of the characters show personal growth. Even though the Herons visit several new locations, the story is predictable and contains few surprises. Like the other books in the series, the crew travel somewhere new, Hal comes up with a brilliant invention, they fight an epic battle and then return home to a celebration. While the interaction between the characters is entertaining, some readers may find the story’s plot tedious rather than exciting.

Fans of the Brotherband Series will find that Scorpion Mountain uses the same formula as the other books in the series. Gilan and the other characters from the Ranger’s Apprentice add interest to the story; however, the characters are not well developed. Despite the story’s predictability, the action and adventure will keep devoted readers interested.

Even kings need “people disagreeing with them. We get accustomed to thinking we’re always right just because we are kings,” King Duncan. –Scorpion Mountain