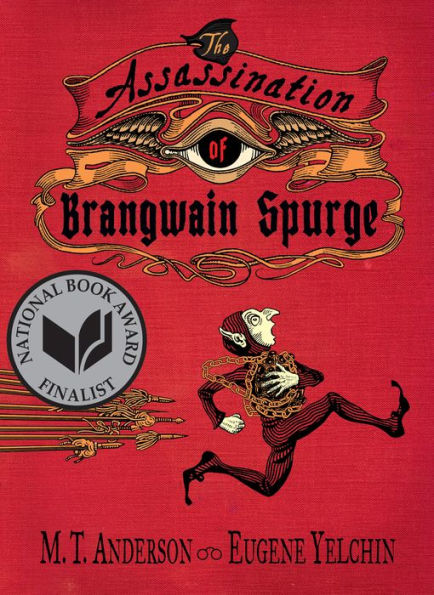 “This fine goblin has taken every abuse for me. He has lost his house, his friends, his livelihood, and his life for me. And he didn’t’ even like me,” Spurge said. —The Assassination of Bragwain Spurge

The Assassination of Bragwain Spurge

Elf historian Bragwain Spurge accepts a dangerous mission to catapult across the mountains, spy on the goblins, and deliver a peace offering to the goblins’ dark lord. No other elf has returned for the goblins’ land, but Spurge is determined to be the first.

Spurge’s host, goblin archivist Werfel, is excited to show the goblin culture to his guest. Instead of being great friends like Werfel had hoped, Spurge’s snobbish attitude and sneaky ways lead to an international crisis. Soon, the two are fugitives fighting for their lives. But in order to survive, and keep their nations from war, the two will need to put their cultural differences aside and work together.

A unique political story, The Assassination of Bragwain Spurge, is told from three points of view.  Werfel tells his version of events in first-person text; the pride and love he feels for his culture and his people shines throughout the entire story. Lord spymaster Ysoret Clivers writes reports to the elves’ leader, which allows the reader to understand lies that were told to Spurge. Spurge transmits pictures of his side of the story back to the elf kingdom. The beautiful, sometimes hilarious, black-and-white illustrations portray the goblin culture from Spurge’s perspective, often making the goblin world appear frightening.

Spurge’s story begins with illustrations of his travel to the goblin’s city. Because the story is told from three points of view, the same events can be seen through different perspectives, which allows the reader to understand how so many misunderstandings can take place between two people. Spurge portrays the goblins as frightening monsters, who leer at him and have disgusting habits. Despite Spurge’s conceited attitude, Werfel makes an excellent host, who is willing to die for the unlikable, unfriendly guest.

Many readers will relate to Spurge, who was bullied throughout school. Spurge has always been “the weed: unwanted by anyone.” Spurge accepted the dangerous mission because “I thought I would be useful. . . I thought I could be different than I was. I thought I could be one of them.” He is heartbroken when he realizes that he was used. Werfel points out that “just because you’re useful to the wealthy doesn’t mean they’ll reward you. It just means they’ll use you.” Spurge’s heartbreak and hurt make his previous behavior understandable.

Spurge and Werfel are not necessarily heroes, but in the end they band together to help bring peace between their people. The conclusion allows the reader to know that there is always the possibility of peace when two people begin to understand each other’s culture. The action-packed, visually inspiring, and funny tale teaches the value of friendship and understanding others’ perspectives. The Assassination of Bragwain Spurge will draw in readers because of the many illustrations; however, only dedicated readers will make it to the end of the book because of the changing points of views, the complexity of the plot, and the length of the story.

“This fine goblin has taken every abuse for me. He has lost his house, his friends, his livelihood, and his life for me. And he didn’t’ even like me,” Spurge said. —The Assassination of Bragwain Spurge