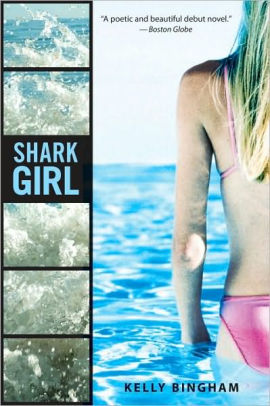 On a sunny day in June, at the beach with her mom and brother, fifteen-year-old Jane Arrowood went for a swim. And then everything — absolutely everything — changed. Now she’s counting down the days until she returns to school with her fake arm, where she knows kids will whisper, “That’s her — that’s Shark Girl.”

In the meantime, there are only questions: Why did this happen? Why her? What about her art? What about her life? In this striking first novel, Kelly Bingham uses poems, letters, telephone conversations, and newspaper clippings to look unflinchingly at what it’s like to lose part of yourself — and to summon the courage it takes to find yourself again.

Part of Jane’s story is told in prose, which allows the text to focus on her conflicting emotions. One reason Jane feels despair at losing her arm is that she can no longer create art, which is one of her passions. During Jane’s stay in the hospital, several people encourage Jane to allow herself to be upset. Jane’s uncle says, “If I were in your shoes, I’d be crying too. . .You have a lot to cry about, and don’t ever apologize for it. It’s part of healing. The tears wash away the pain.”

Many people who have lost a limb write to Jane, telling her about their ordeals and how life does get better. Others want Jane’s advice when it comes to their own tragedies. The letters, which are scattered throughout the book, help reinforce the idea that people can lead happy lives even after a life-altering tragedy.

Anyone who has ever had to overcome an obstacle will relate to Jane, who is struggling to learn how to deal with the loss of her arm. The story is broken into three parts. Part one focuses on Jane’s hospital stay, where she befriends another patient. Part two shows Jane’s difficulty when she gets home. At first, Jane doesn’t want to leave the house because people stare at her. She also doesn’t help with chores anymore. Part three shows how difficult it is for Jane to return to school.

Shark Girl is an easy-to-read story that shows Jane’s struggle to thrive with only one arm. At the beginning of her journey, she sometimes wishes she would have died. However, with the help of others, Jane beings to relearn how to do simple things like cooking an omelet or putting on a bra. By the end of the book, Jane is glad she survived and hopes to use her experience to help others.

Because Shark Girl focuses on Jane’s recovery, much of the story details Jane’s inner thoughts and her conversations with others. Because Jane’s story begins after the shark attack, there is little suspense or action. However, if you’re struggling to overcome grief, Shark Girl would be an encouraging story that explores how to deal with loss and grief.