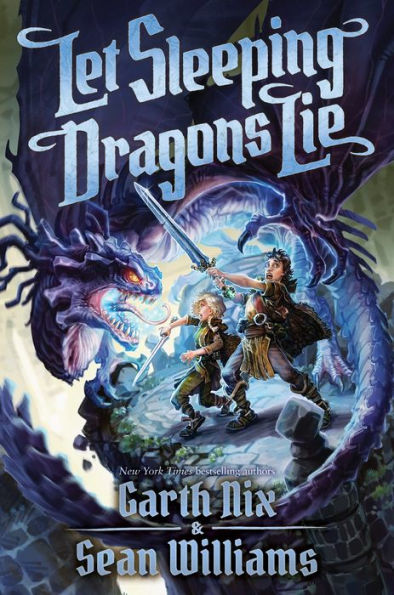 “Times are changing, and you can’t fight it —not with steel or spells or other old-fashioned notions. This is the age of opportunity, where anyone can rise regardless of birth or wealth,” Scream. –Let Sleeping Dragons Lie

Odo and Eleanor are excited to be knights. The only problem is that nothing ever happens in their sleepy little village. While Odo is happy to wait for some action to come his way, Eleanor is eager to go on the next adventure. Both knights know they are prepared to go on a quest, especially since they have their trusted and talkative enchanted swords.

When bilewolves attack the village, two strangers show up to dispatch the evil creatures. The strangers, Edga, and Hundred, are determined to prevent an unbearable imposter from taking the crown. Odo, Eleanor, and their swords join the quest. They will wander through unfamiliar lands, fight unseen enemies, and prepare for an epic battle.

The second installment of the Have Sword, Will Travel Series loses its humor and lacks a lot of the charm of the first book. When Odo and Eleanor join the quest, they meet two new characters, Edga and Hundred. Unfortunately, neither of these characters is relatable. Years ago Edga abdicated the thrown, and now he believes Kyndryk should be king. However, Kyndryk rarely appears. When he does, none of his actions prove he is worthy of becoming king.

Several new characters appear in book two. However, a bat that has been taught to recite letters in order to deliver messages is the most interesting character. All of the new characters are one-dimensional. Even though their quest is admirable, their personalities do not pop off the page. As the group travels to stop the coronation, the action lags. When the group finally makes it to their destination, a dragon appears, but his appearance is anticlimactic. Instead of adding an interesting element, the dragon does nothing to add to the story’s plot.

Readers who fell in love with Odo and Eleanor in Have Sword, Will Travel will be slightly disappointed in the sequel, Let Sleeping Dragons Lie. The simple plot, the slow pace, and the lack of enchanted sword action all add up to a mediocre sequel. If you’re looking for an excellent fantasy series, the Riders of the Realm Series by Jennifer Lynn Alvarez and the Max Tilt Series by Peter Lerangis both take readers on an adventurous journey full of wonder.

“Times are changing, and you can’t fight it —not with steel or spells or other old-fashioned notions. This is the age of opportunity, where anyone can rise regardless of birth or wealth,” Scream. –Let Sleeping Dragons Lie