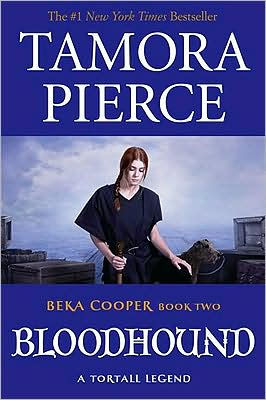 The second self-sufficient book in the Beka Cooper series expands Beka’s word beyond the walls of her city. Off to Port Caynn to hunt down the mysterious origins of a colemongering ring that may have the power to bring an entire kingdom to its knees, Beka can’t afford any mistakes. Pounce is off in the Devine Realm, but a new friend might be able to help her catch the Rat behind this dangerous game.

Bloodhound is an excellent book that keeps Beka’s story fresh with new characters and scenery. The language and sexual content is slightly escalated from Terrier, but the long chase at the end will have readers rooting for Beka to succeed.