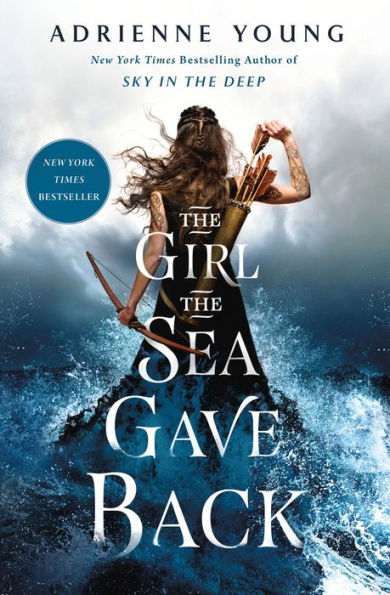 “The Spinners were wise, but they weren’t always kind. Sometimes fate was a tangled knot. Sometimes it was a noose. Or a net. But sometimes, it was the rope that pulled you from the sinking deep,” Tova. –The Girl the Sea Gave Back

The Girl the Sea Gave Back

For as long as she can remember, Tova has lived among the Svell, the people who found her washed ashore as a child and use her for her gift as a Truthtongue. Her own home and clan are long-faded memories, but the sacred symbols and staves inked over every inch of her skin mark her as one who can cast the rune stones and see into the future. She has found a fragile place among those who fear her, but when two clans to the east bury their age-old blood feud and join together as one, her world is dangerously close to collapse.

For the first time in generations, the leaders of the Svell are divided. Should they maintain peace or go to war with the allied clans to protect their newfound power? When their chieftain looks to Tova to cast the stones, she sets into motion a series of events that will not only change the landscape of the mainland forever but will give her something she believed she could never have again—a home.

Although the story focuses on Tova, she is not an easy character to relate to. It is clear that the Svell dislike her; however, the reason for their fear is never explained. In the beginning, Tova seems content to follow orders and do what she is told. Although she does not like foretelling death, she doesn’t think about the consequences of her actions. Of the two characters, Halvard is more likable and interesting. He constantly doubts his worthiness but is willing to take risks to save those he loves.

In the end, The Girl the Sea Gave Back is a tale of war and fate. Long bloody battles propel the story forward, and although there is plenty of action, the characters lack development. Even though war is described in detail, it is not glorified. Instead, the story makes it clear that peace is difficult to obtain, but it is worth working towards. Halvard learns that “war is easy. It comes again and again, like waves to a shore. But I lived most of my life driven by hate, and I don’t want that for my grandchildren. Or yours.”

Although beautifully written, The Girl the Sea Gave Back lacked in world-building and will leave the reader with many unanswered questions—both about the characters and what will happen to the warring tribes. The complicated story uses graphic imagery that will leave some readers squeamish. Only strong readers who are looking for a Viking-inspired war story should read The Girl the Sea Gave Back.

“The Spinners were wise, but they weren’t always kind. Sometimes fate was a tangled knot. Sometimes it was a noose. Or a net. But sometimes, it was the rope that pulled you from the sinking deep,” Tova. –The Girl the Sea Gave Back