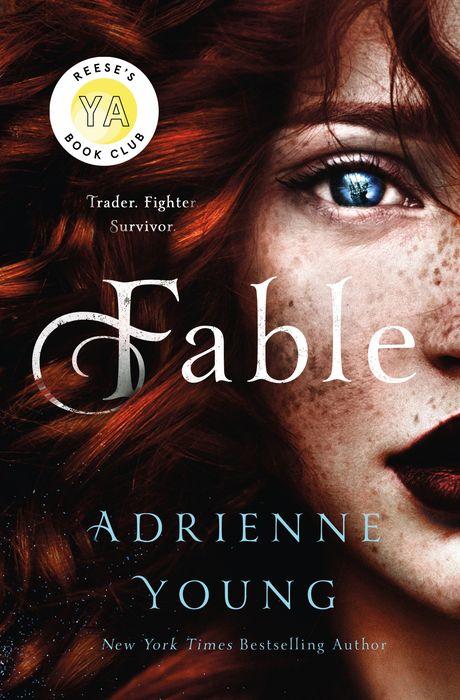 “That was one of Saint's rules. ‘Nothing is free.’ He wasn't just talking about food or passage or the clothes on your back. He was talking about respect. Safety. Protection. They were things no one owed. And one way or another, you always paid,” Fable. –Fable

Seventeen-year-old Fable only wants one thing: to reunite with her father, Saint. Even though he abandoned her on an island four years ago after her mother’s death, Fable still wants to earn a place among her father’s crew. The first step is to escape from Jeval, the cutthroat island Fable refuses to call her home. She spends her days scavenging for rare minerals and trading with a helmsman named West in exchange for measly amounts of copper. Eventually, Fable has enough copper to escape Jeval on West’s ship, Marigold, and make her way across the sea—The Narrows—to the city of Ceros where her father’s trading empire has flourished. However, aboard the ship, Fable discovers that there’s more to her story and the ship’s crew than what meets the eye.

Fable learns that the Marigold isn’t West’s ship, rather it belongs to her father. While keeping her identify as Saint’s daughter a secret, she also discovers that West and the rest of the crew have secrets of their own. Willa, the crew’s only other female, is West’s sister. Plus, Paj and Austere are running from a dark past. But West is hiding the most: after Fable is scorned by her father once more, Saint reveals that he made an agreement with West to give Fable money and take care of her from afar. Saint claims this is the best thing he could’ve done for Fable because she would learn to survive the harsh world. Fable narrates that Saint “expected me to be grateful for the hell he’d put me through, so he could take credit for who I was. . . I’d crossed the Narrows for a man who’d probably never even loved me. For a dream that would never come true.”

Even after this disappointment, Fable still finds a reason to go on– she does have a family– but it isn’t one made by blood. Fable realizes that the crew of the Marigold are the ones who have protected and nurtured her. She hopes to use the inheritance given to her by her father to buy the Marigold, so West and the crew can be free from Saint, just like her. The book ends on a cliffhanger when Fable is kidnapped, so readers will be reaching for the next book, Namesake: A Novel, to discover if Fable achieves her goal.

Fable as a story is both entertaining and exciting. The reader is thrown directly into a world with new places, names, jobs, and nautical terminology that may take a while to grasp, but contribute to a fast-paced plot that is still understandable and full of unexpected twists. Sometimes, it can be hard to believe that these young kids are able to fend for themselves like experienced adults, but they also live in a world where they had to grow up fast or they wouldn’t get the chance to grow up at all.

The novel is told through Fable’s point of view and emphasizes the idea of “found family,” a group of individuals pulled together by similar circumstances or experiences that come to trust and care for each other like a blood family. This is especially meaningful because of how Fable’s father is against caring for other people and fails to realize that there is strength in having others around you.

While Fable’s life is vastly different than the lives teens lead today, it’s hard not to root for her because of how passionate she is to find her father. When this dream falls short of her expectations, Fable wins our hearts again when she uses this setback as a learning experience; it’s not a father she wants, it’s a family. Fable’s willingness to trust the crew of the Marigold shows that no matter one’s past, love and acceptance are waiting if we open our hearts.

“That was one of Saint's rules. ‘Nothing is free.’ He wasn't just talking about food or passage or the clothes on your back. He was talking about respect. Safety. Protection. They were things no one owed. And one way or another, you always paid,” Fable. –Fable