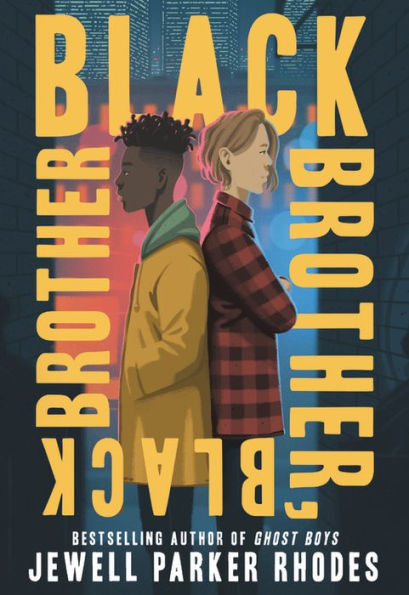 “Fencing has aristocratic roots. But you belong here. We all do,” Coach Arden Jones. —Black Brother, Black Brother

Donte is black, and the white kids at Middlefield Prep won’t let him forget it. They especially won’t let him forget that they like his lighter-skinned brother, Trey, more than Donte. To make matters worse, the administration turns a blind eye when the students harass Donte. When Donte gets bullied and arrested for something he didn’t do, he feels immensely frustrated and helpless.

Then Donte meets former Olympic fencer Arden Jones. Jones begins to train Donte to take on his main bully: the Middlefield Prep fencing captain, Alan. With support from his friends, family, and the folks at the youth center, Donte begins to unpack the systemic racism that has sought to hold him down all his life.

Through Donte and his family’s eyes, Black Brother, Black Brother tackles systemic racism head-on. Jewell Parker Rhodes shows a range of characters including those who willingly ignore the racism, those who show microaggressions, and finally those who are outright racist like Alan. This book is unflinchingly honest in how it deals with how others treat Donte differently than his brother Trey, who has lighter skin. Even the police treat their father, a white man, differently than their mother, a black woman. These experiences are presented openly and honestly, and in a way, that younger readers will be able to understand.

Donte and the other characters are fully fleshed-out people. Donte and Trey’s relationship shows their solidarity and brotherly love as well as the moments where Donte feels insecure around his older, more popular brother. Their relationship with their parents is also lovely, as they are protective of their sons.

The local Boys and Girls Club has a wide range of characters who bring life to the story. The most prominent of these characters is Donte’s coach, former Olympic fencer Arden Jones. Arden helps Donte grapple with the patience and fortitude required in fencing and in life. Arden’s personal experiences and frustrations show Donte how to conduct himself, and by the end, Donte is an excellent fencer who isn’t afraid to stand up for himself.

Black Brother, Black Brother is an important book that illustrates how racism operates on many levels, and how deeply it affects people of all ages. While this book will appeal to people who like fencing, it is a must-read for all people of any age. Through Donte’s experiences, readers will learn about people from various walks of life and the importance of individual courage. Donte may not be real, but he is certainly not the first nor the last student to be judged on the basis of race when he and every other student should be judged based on the content of their character.

“Fencing has aristocratic roots. But you belong here. We all do,” Coach Arden Jones. —Black Brother, Black Brother