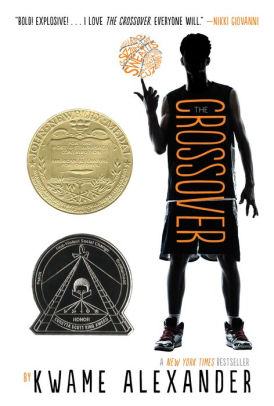 “The sky is your limit, sons. Always shoot for the sun and you will shine,” Chuck “Da Man” Bell. —The Crossover

Twelve-year-old Josh and his twin JB Bell are the kings of the basketball court. Untouchable and unstoppable—the sons of former professional basketball player Chuck “Da Man” Bell couldn’t be anything less than excellent. But when Alexis walks right into the twins’ lives and steals JB’s heart, Josh is left without his best friend by his side. Meanwhile, the boys’ father’s health is on the decline, despite Chuck’s utter denial. Josh and JB must deal with the consequences of everyone’s actions—including their own.

The Crossover does an excellent job of mixing different storylines. The tensions between the twins’ father’s health, the upcoming basketball championships, and the brothers all get a good amount of page time and work together to raise the stakes. Josh and JB have more arguments as the pressure increases in basketball, and their father has more and more complications with his health as the book continues. The climax of the book is foreshadowed well early on, and each plot point finds an end.

These plot threads help create the themes of family, atonement, and inheritance. The dynamic between the twins, their mother (Crystal), and their father (Chuck) is healthy, though they do occasionally argue. JB and Josh argue with each other often. But when JB refuses to speak to Josh after Josh nearly breaks JB’s nose with a basketball, Josh reveals just how much he loves his family. He also does everything in his power to atone for his actions, and he and JB soon forgive each other. The boys also deal with their father’s legacy and how the legacy impacts their futures. Chuck was a basketball star, and the boys have inherited his prowess on the court. However, high blood pressure and stubbornness also run in the family, and the boys struggle with the fact that they may also inherit these negative characteristics.

While this Newbery Medal Winner is short, Alexander handles all these topics well. Basketball fans will enjoy The Crossover for the sport aspects, but the appeal of the book reaches further than the court. Josh and his family are realistic characters who experience universal emotions like love, anger, and loss. The Crossover is an excellent story that even non-readers and non-sport fans will find enjoyable. The story shows that despite differences in time, space, and opinion, we carry our loved ones in our hearts, always.

“The sky is your limit, sons. Always shoot for the sun and you will shine,” Chuck “Da Man” Bell. —The Crossover