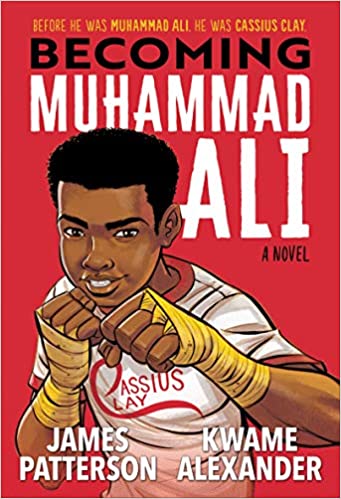 “Education is the bicycle that’ll get your there, Cassius. You keep pedaling, sometimes uphill, sometimes down. I want to see you doing better in your schooling, not throwing punches at the wind,” Daddy. – Becoming Muhammad Ali

Before he became the legend, Muhammad Ali, young Cassius Clay learned history and card tricks from his grandfather, hid report cards from his parents, and biked around Louisville with his pals. But when his bike is stolen, Cassius decides there’s something else he wants: to be able to fend off bullies by becoming a boxer.

Cassius has a best friend, Lucky, who sticks by him whether his fists are raised in victory or his back is against the ropes. Before long, Lucky is cheering Cassius on in his first amateur fight. With the support of all his friends and family, will Cassius make it to the top?

Becoming Muhammad Ali focuses on Cassius’ younger years and highlights the importance of his family and his community. Cassius’ story is told from both his point of view and his best friend’s point of view. When Cassius is telling his own story, the words appear in poetry format. This narrows the story and allows Cassius’ swagger to shine. When the story shifts to Lucky’s point of view, the text appears in paragraph structure that uses a conversational tone. Lucky’s perspective allows the reader to see Cassius’ intense training schedule and shines a light on Cassius’ fear. The joint perspectives give a well-rounded picture of Cassius’ bold personality and personal struggles.

Because the story begins in the late 1950s, Cassius’ story isn’t just about boxing. The biographical novel delves into the racism prevalent during this time period. Each example of racism is described in a kid-friendly manner that allows the reader to picture the events. The descriptions all focus on events that affected Cassius. He explains the events in a way that shows the unfairness of the situation without sounding bitter or preachy. However, some readers will not understand the correlation between racism and Cassius’ desire to change his name to Muhammad Ali and “use his time to focus on black pride and racial justice.”

Becoming Muhammad Ali is an entertaining and engaging biographical novel that will inspire readers to fight for their dreams. Through Cassius’ actions, readers will see the hard work and dedication that allowed Cassius to become one of the best boxers in history. However, Cassius’ story isn’t just a boxing story, it’s a story about family and friends. Cassius’ story doesn’t gloss over some of the unfairness in life. Instead, Cassius shows how he overcame obstacles and, in the end, realized that there are some things that are more important than boxing.

When a reporter asked what Cassius wanted to be remembered for, he said, “I’d like for them to say, he took a few cups of love, he took one tablespoon of patience, one teaspoon of generosity, one pint of kindness. He took one quart of laughter, one pinch of concern, and then he mixed willingness with happiness, he added lots of faith, and he stirred it up well. Then he spread it over a span of a lifetime, and he served it to each and every deserving person he met.”

Cassius’ story comes to life in easy-to-read prose and includes full page, black and white illustrations that are scattered throughout. Becoming Muhammad Ali is a must-read because it highlights how hard work and dedication allowed Cassius to achieve his dreams. Readers who want to read another inspirational sports book should check out The Crossover by Kwame Alexander, which has also been made into a graphic novel.

“Education is the bicycle that’ll get your there, Cassius. You keep pedaling, sometimes uphill, sometimes down. I want to see you doing better in your schooling, not throwing punches at the wind,” Daddy. – Becoming Muhammad Ali